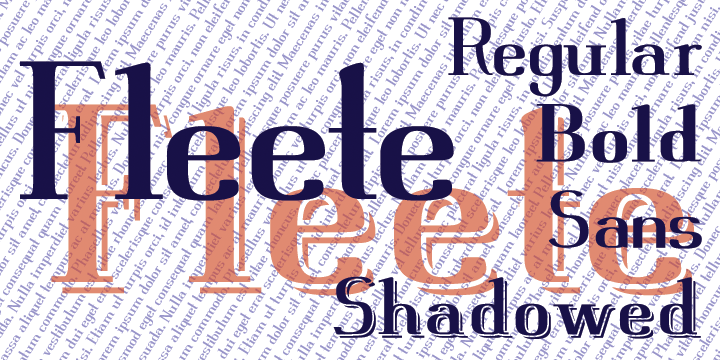 Fleete is a display serif font family. This typeface has four styles and was published by Greater Albion Typefounders.

A four font family. This contains every font in the Fleete Family.

Fleete is a modern homage to the many late 19th century typefaces; often used for book titles, posters and newspaper headlines; which have an extreme contrast between hairline horizontal stems and serifs and heavy vertical stems.  Greater Albion Typefounders have taken this basic idea, to be found across very many faces of the period and used just that one concept as the basis of a new typeface design, which manages to be elegant yet modern all at once.  IF you need something for section heading which stand out from body text, this is the font family for you.  If you need headings on a poster or large scale web-page headings, this is the face you should try.  If you need several weights of heading-no problem; Fleete comes in Regular, Bold and Shadowed, as well as a newly designed Sans Serif form.