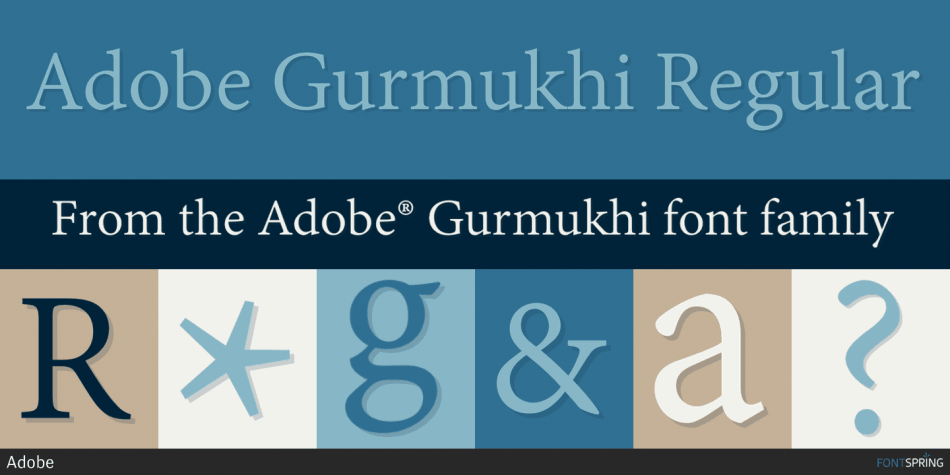 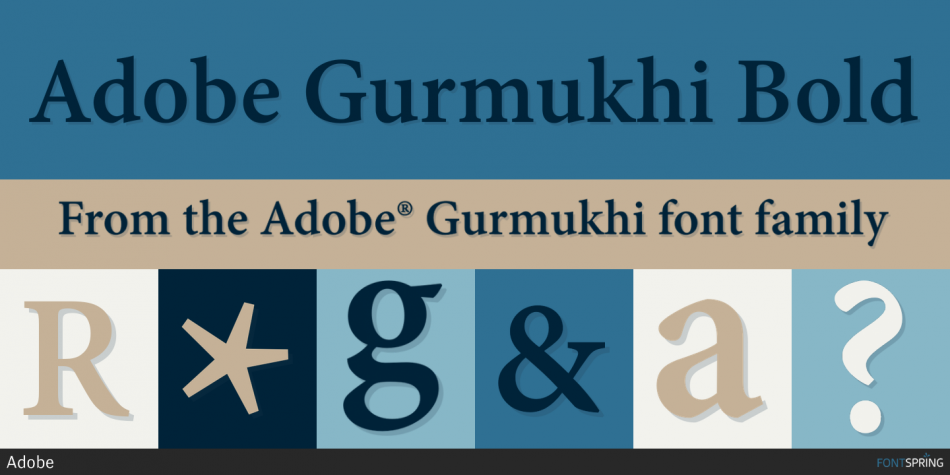 Adobe® Gurmukhi is a serif font family. This typeface has two styles and was published by Adobe.

The Adobe Gurmukhi family is the result of a working collaboration by Paul D. Hunt of Adobe and Vaibhav Singh. The general design follows the treatment realized by Tim Holloway and Fiona Ross in their work on the Adobe Devanagari family. Due to the adherence to this design logic, Adobe Gurmukhi is a radical departure in text typeface design for Gurmukhi script, the most common writing system which is used to represent the Punjabi language (as opposed to the Arabic-based Shamukhi script). Whereas virtually all modern text typefaces for Gurmukhi are strictly low contrast, bordering on monolinear design, Adobe Gurmukhi attempts to fuse calligraphic details, which can be readily seen in traditional Punjabi manuscripts, with modern proportions and character constructions. The rationale behind this approach is to reintroduce some of the attractiveness of modulated letterforms to Punjabi text typography while retaining letter shapes familiar and legible to today’s readers. Unlike similar Indian writing systems such as Devanagari or Bengali, Gurmukhi calligraphy is not strongly influenced by any one model of letter construction. Therefore, in choosing writing samples on which to base the design for this type family, Hunt favored those more in line with the calligraphy of related Indian scripts. The Adobe Gurmukhi fonts comply with the Unicode standard for character encoding and leverage the technology of OpenType to produce correct script shaping and accurate mark placement. The resulting typeface is an important addition to the cannon of Gurmukhi type that can be used successfully in a wide range of typographic environments. Adobe Gurmukhi works best in text setting, for which it was designed, but the letter shapes remain interesting and elegant when set at larger display sizes.