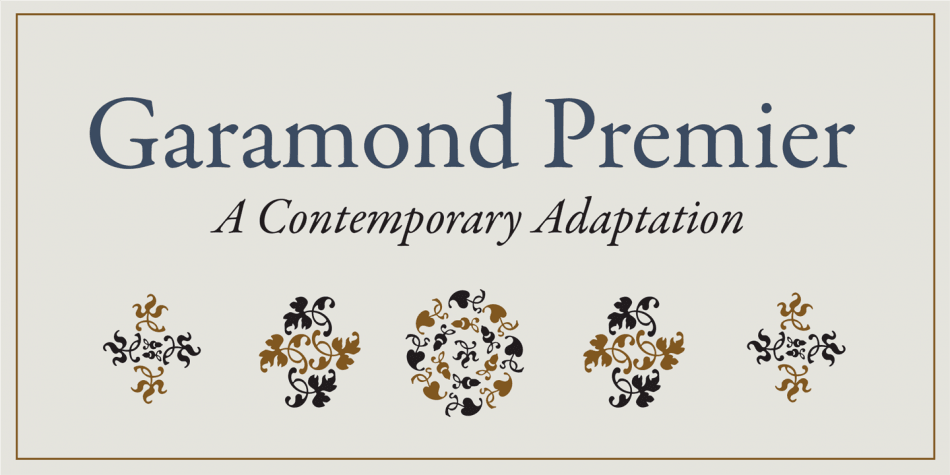 Garamond Premier Pro is a serif font family. This typeface has thirty-four styles and was published by Adobe.

Garamond Premier Pro had its genesis in 1988 when Adobe Principal Designer Robert Slimbach visited the Plantin-Moretus Museum in Antwerp, Belgium, to study their collection of Claude Garamond’s metal punches and type designs. Garamond, a French punchcutter, produced a refined array of book types in the mid-1500s that combined an unprecedented degree of balance and elegance, and stand as a pinnacle of beauty and practicality in typefounding. While fine-tuning Adobe Garamond (released in 1989) as a useful design suited to modern publishing, Slimbach started planning an entirely new interpretation of Garamond’s designs based on the large range of unique sizes he had seen at the Plantin-Moretus, and on the comparable italics cut by Robert Granjon, Garamond’s contemporary. By modeling Garamond Premier Pro on these hand-cut type sizes, Slimbach has retained the varied optical size characteristics and freshness of the original designs, while creating a practical 21st-century type family. Garamond Premier Pro contains an extensive glyph complement, including central European, Cyrillic and Greek characters, and is offered in five weights ranging from light to bold.