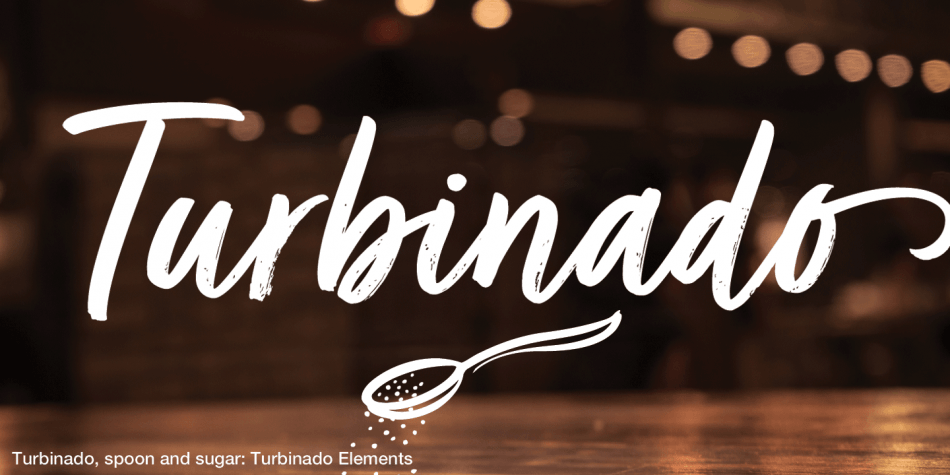 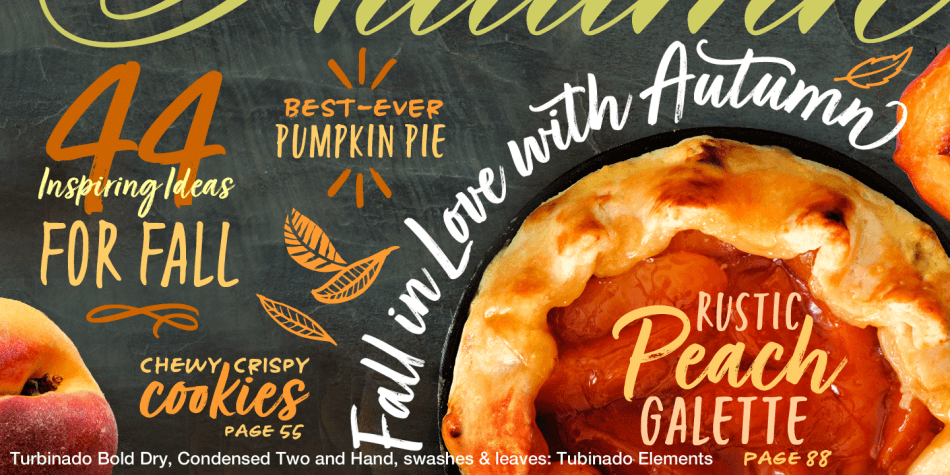 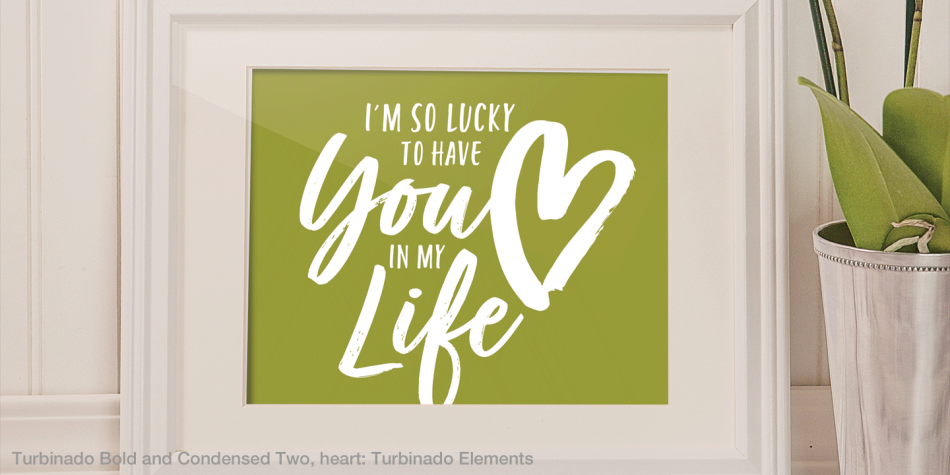 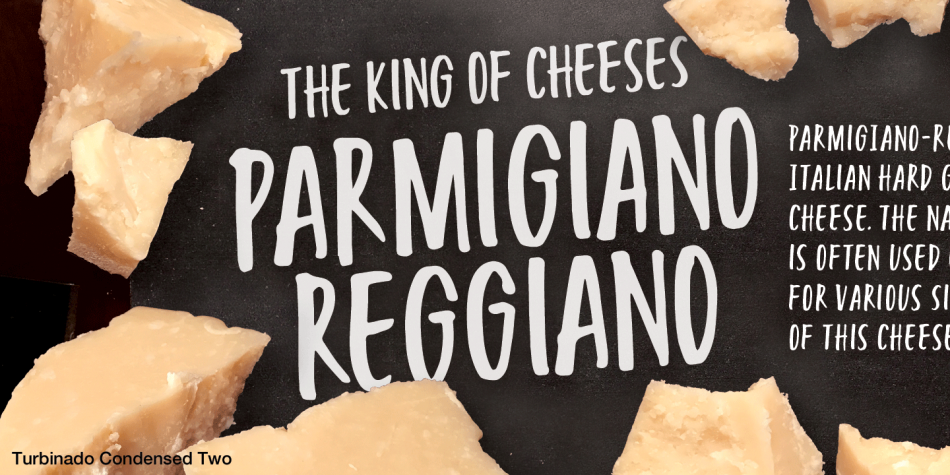 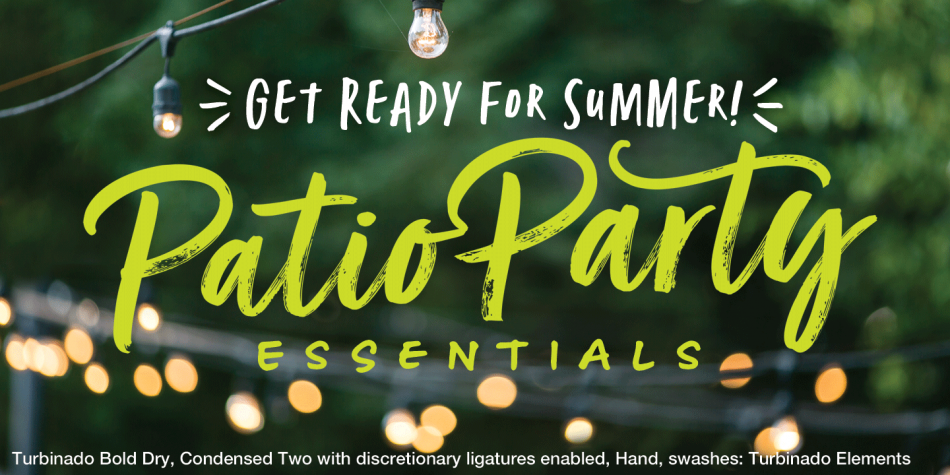 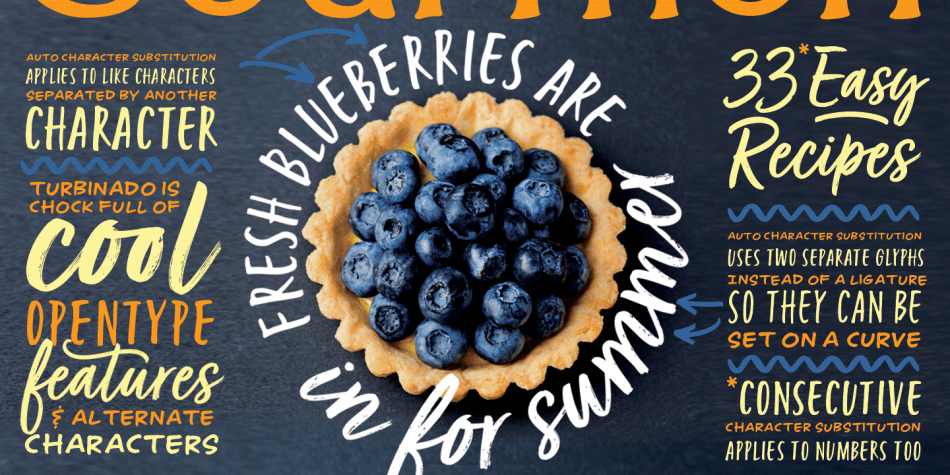 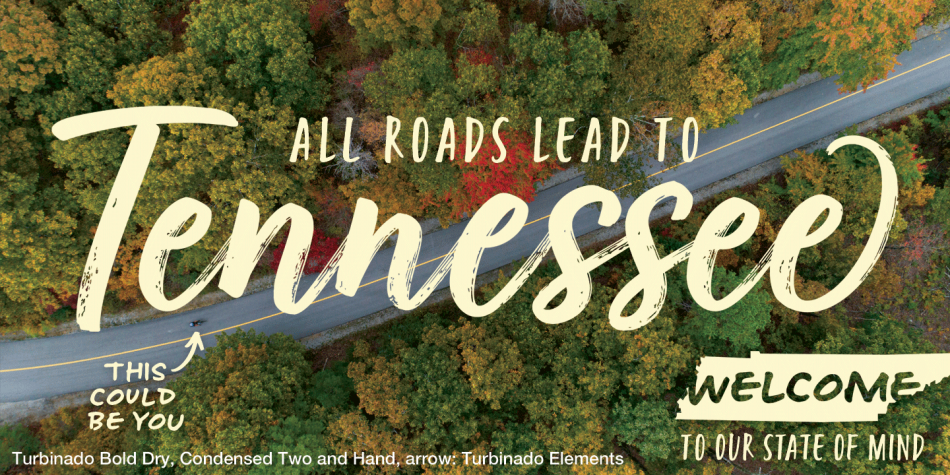 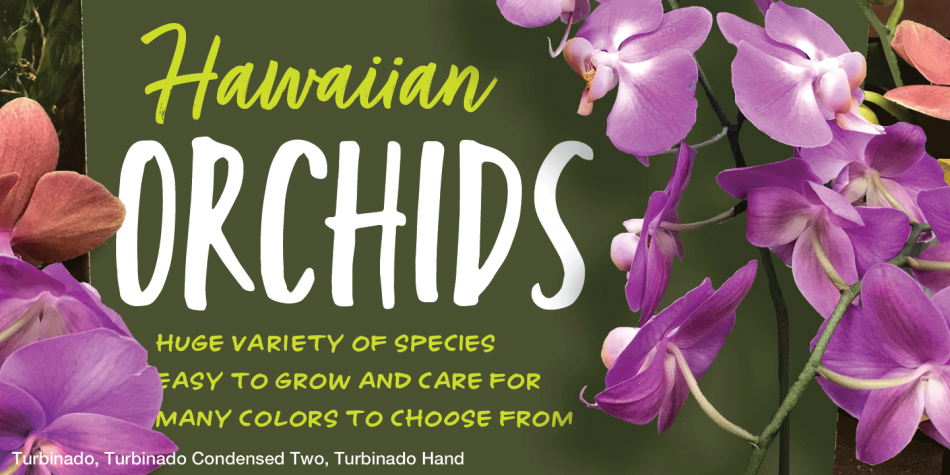 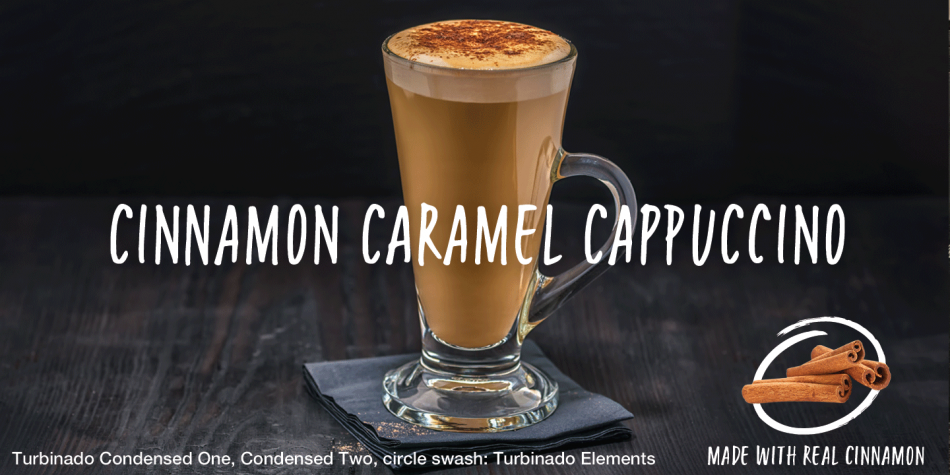 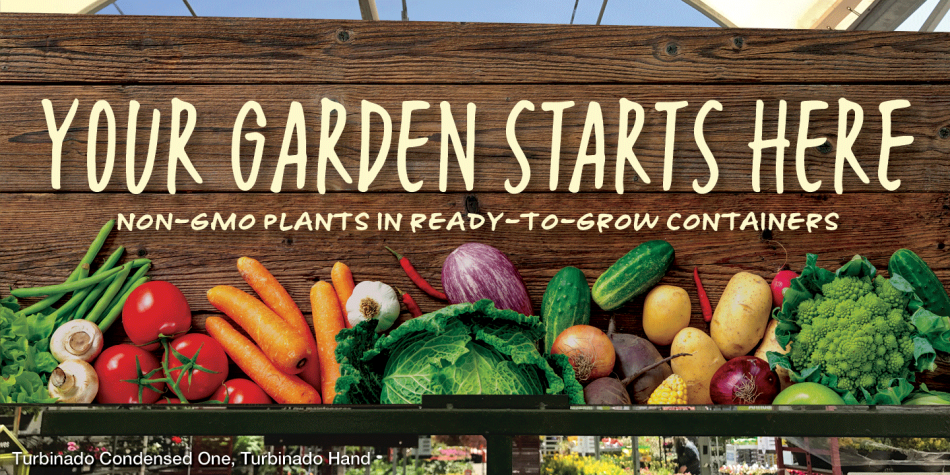 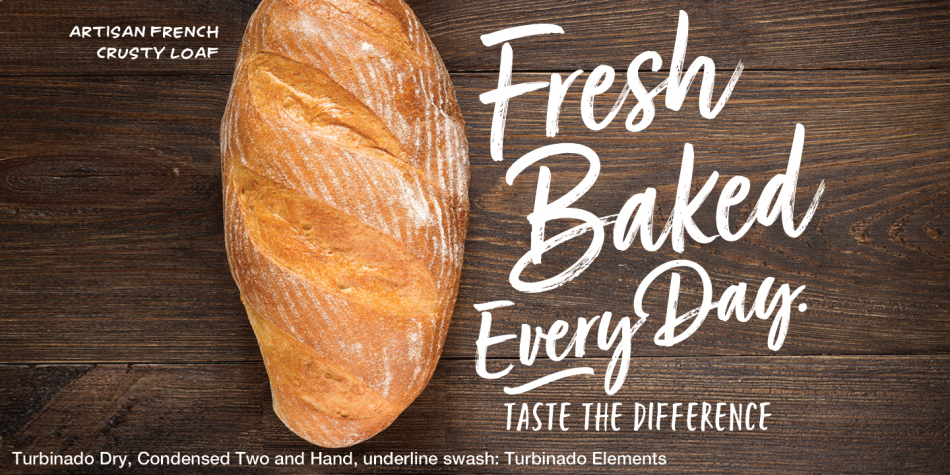 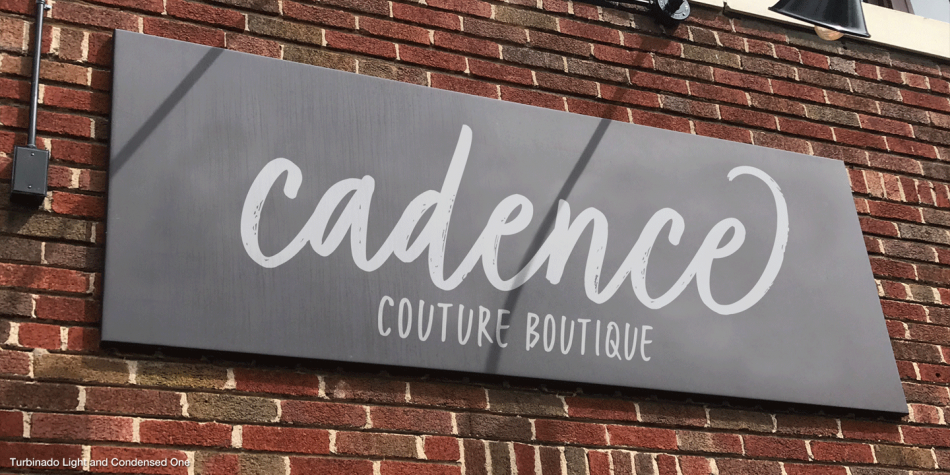 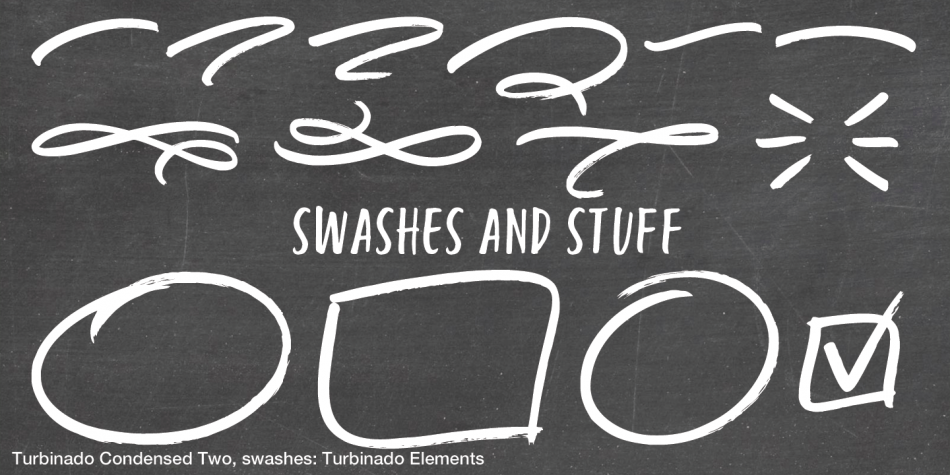 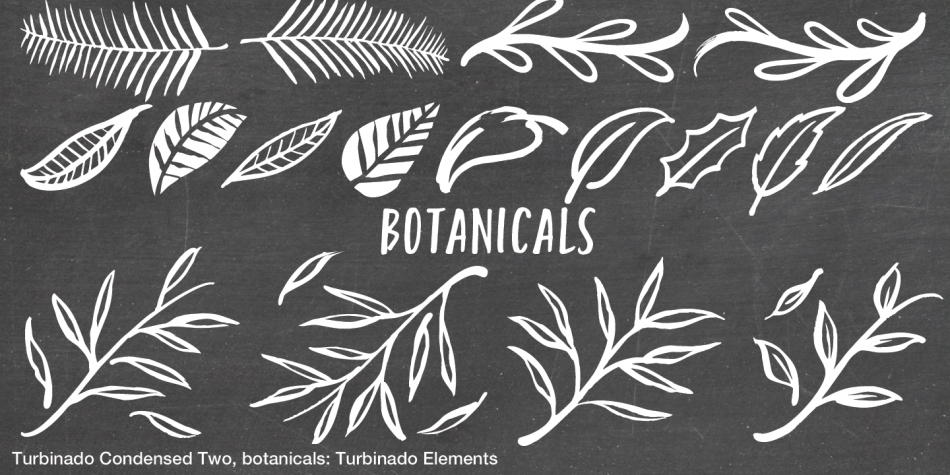 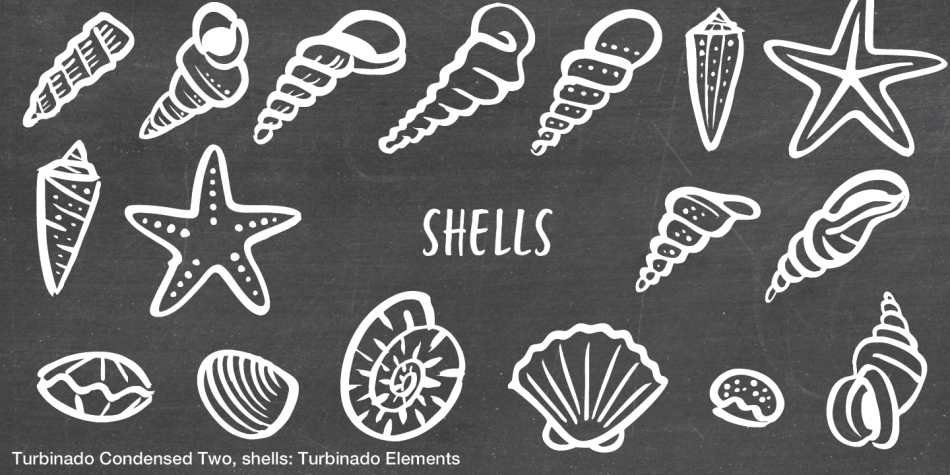 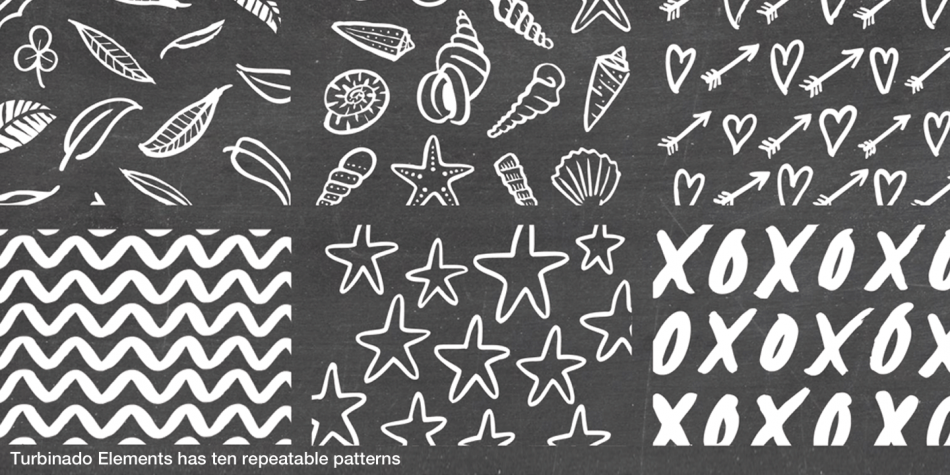 Designed by Stephen Miggas, Turbinado™ is a brush script, hand display and dingbat font family. This typeface has ten styles and was published by Aerotype.

The Turbinado™ Set was designed to be clear and easy to read with a friendly personality, ideal for advertising and packaging in both text and display settings. It has nine typefaces and an elements package all designed to work together. Included are three weights of brushed casual script, each with a dry version, two condensed all caps faces, another hand printed caps face and a set of over 100 brushed elements that include swashes, botanicals, shells, arrows, repeatable patterns and a few other doodads that also play well with the fonts.

The script fonts have alternate characters including swash glyphs for ends of words, and like all of my script designs, I’ve taken care to ensure that connections are smooth between all possible character combinations. All of the fonts use the OpenType standard ligature feature to automatically differentiate consecutive lowercase letters—and numbers—but using separate glyphs, rather than a single ligature so they can be set on a curve or colored separately, etc. Taking it a step further, all of the Turbinado fonts also automatically differentiate like characters that are separated by another letter when standard ligatures is enabled. And it has a few ligatures too, like using a single crossbar to unite the At and Att letter combinations. The two condensed faces have a third set of less uniform glyphs that can be used to create a more quirky, fun and bouncy effect (see the ‘she sells seashells’ graphic above) when the discretionary ligature feature is on. I’ve included a couple other nifty (I think) features too, including smart apostrophes, so that script characters still connect when an apostrophe is used between them in common situations, and try typing a < and a 3, it may come in handy sometime ;)

The script fonts have 10+ lowercase t (and double t) crossbar alternates that can be selected from the OpenType glyph table manually, or you can enable the contextual ligature feature to automatically insert a bigger crossbar as the surrounding letters allow throughout a text box or document. Hello? Are you still there? :) If that’s not enough crossbar for you, enable stylistic set SS01 for even bigger, more whimsical crossbars. And for those intrepid typographers who would rather fashion their own lowercase t to custom fit a specific design, all of the lowercase t ascenders and crossbars are also available separately in the glyph table when t is selected, and can be combined manually.