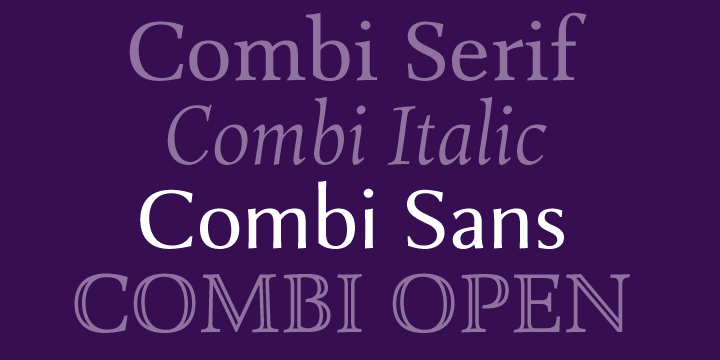 Combi Sans is a sans serif font family. This typeface has ten styles and was published by Aviation Partners.

A ten font family. This contains every font in the Combi Sans Family.

The Combi collection of faces includes Serif, Serif Oblique, Sans, Sans Oblique, a true Italic and a set of Openface capitals. Combi fonts have 5 compatible weights and metrics allowing them to be used in free combination. Inspiration came from Jan Van Krimpen’s Romulus (Enschedé, 1931). In addition to the Roman style, Van Krimpen created a set of open capitals, a simple oblique variant and subsequently, an attractive calligraphic italic, Cancelleresca Bastarda.  In addition to Van Krimpen’s idea, Combi has been influenced by features from many faces including Bembo, Melior and Optima. The object was to create a versatile family of body text and titling faces for use in books, magazines and on the web.  Glyphs are available for most Latin based languages and all fonts include small caps and proportional numeral options.