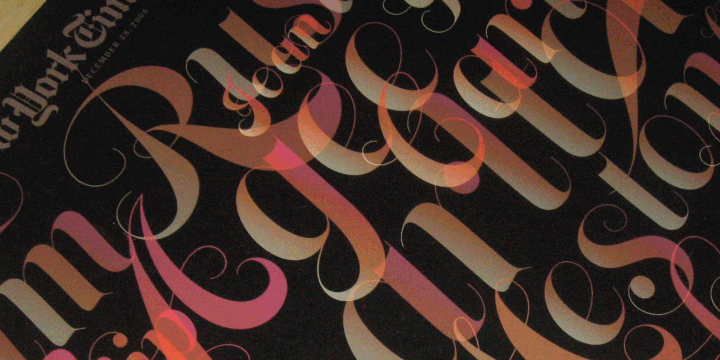 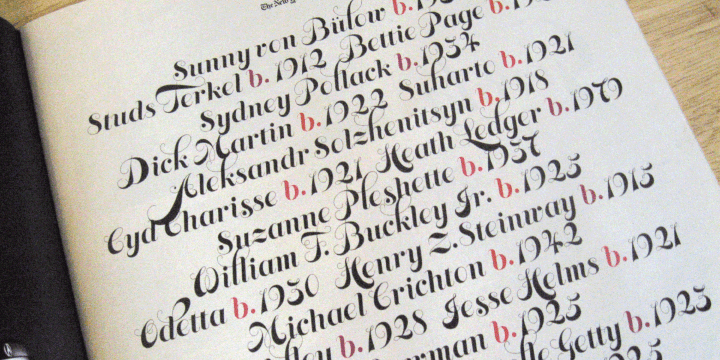 The tradition at the New York Times magazine has been to dedicate the year’s last issue to the people who passed away during the year, especially those whose lives have affected us. Art director Nancy Harris Rouemy, whose typographic design sense has earned her many prestigious awards over the years, decided on an all-type magazine cover for the 2008 issue, and commissioned Canada Type’s Patrick Griffin to do a new typeface especially for that project.

Though a few other Canada Type faces were used in the magazine with great results over the preceding months (mainly Ambassador Script and Sympathique), Nancy thought a some of the ideas in Jezebel’s uppercase and Treasury’s lowercase would be a good fit onto an all-type commemorative cover, but with a much higher contrast and the infusion of a more luxurious and elegant brand of poster calligraphy that doesn’t date itself. After a few different attempts, the first shapes were born, and six weeks later there were enough forms to do the cover. The typeface was such a success with the editors and designers, it was used all over the magazine, instead of just the cover.

The list of people being commemorated with this font was certainly enough to convince Patrick to take on such a demanding project. He’d grown up in a culture where names like George Carlin, Michael Crichton, Bobby Fisher, Charlton Heston, and Paul Newman were daily household language, and this was a great opportunity to offer a final tribute to them. Also the pleasure of working with Nancy Harris Rouemy, the lady with the X-ray eyes, with her unwavering vision and constant attention to typographic detail, went a long way to shaping this typeface and making it the modern and contemporary piece of elegance it became.

The New York Times magazine issue that first used Memoriam Pro went on to win a multitude of design contests and publication awards, and continues to raise appreciative eyebrows to this very day. The Memoriam design concept also became one of the most drawn-upon and imitated in recent memory.

The retail version of Memoriam Pro was released to enormous fanfare in mid-2009. Since then it has become a standard sight on book and magazine covers, billboards, food and cosmetics packaging, event posters, and high-end design pieces everywhere. It continues generating many calls for project-specific customization for countless publications and design agencies. In 2011 three new Memoriam Pro variants (Headline, Outline and Inline) to accommodate public demand.