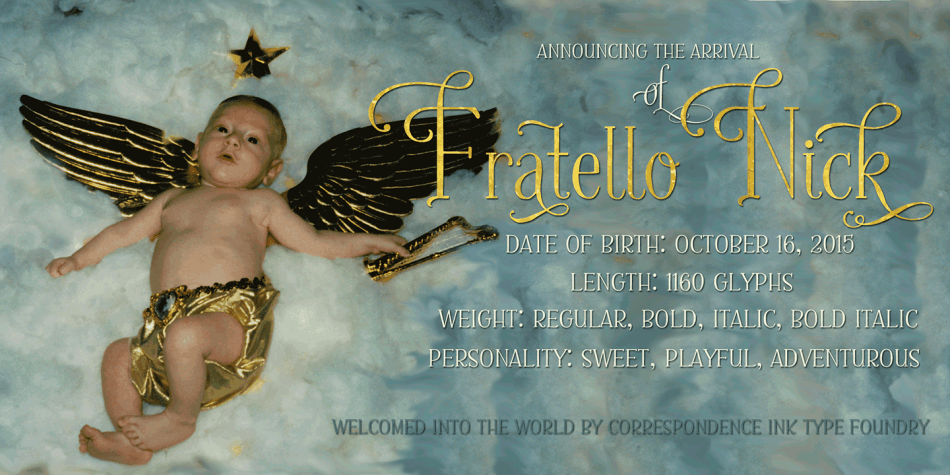 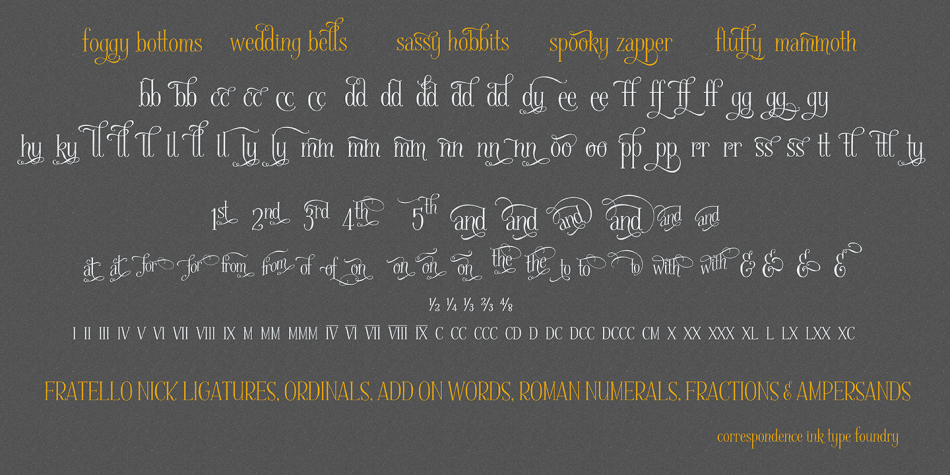 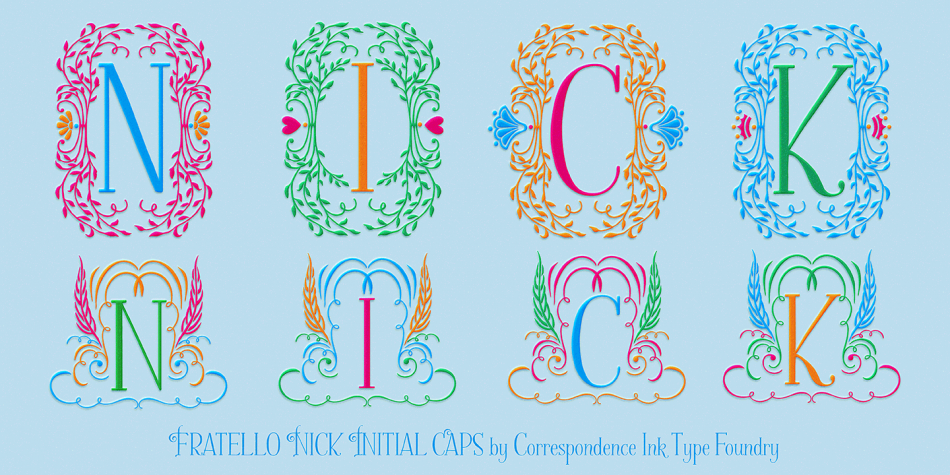 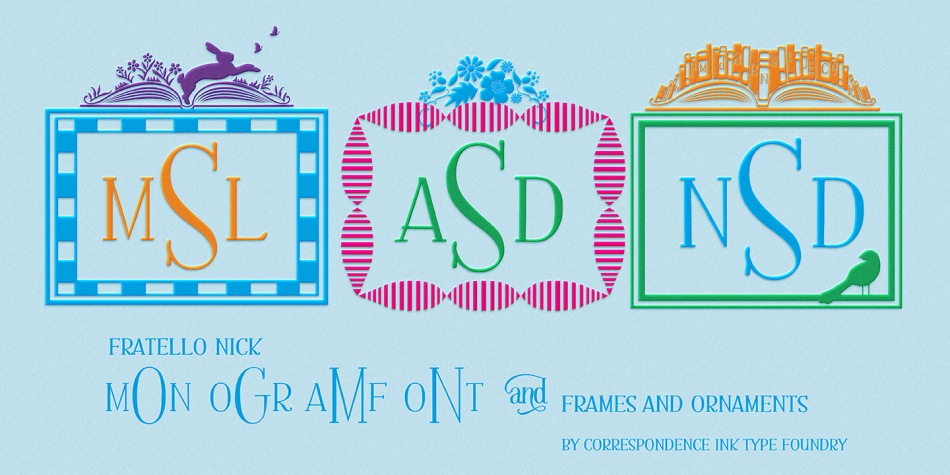 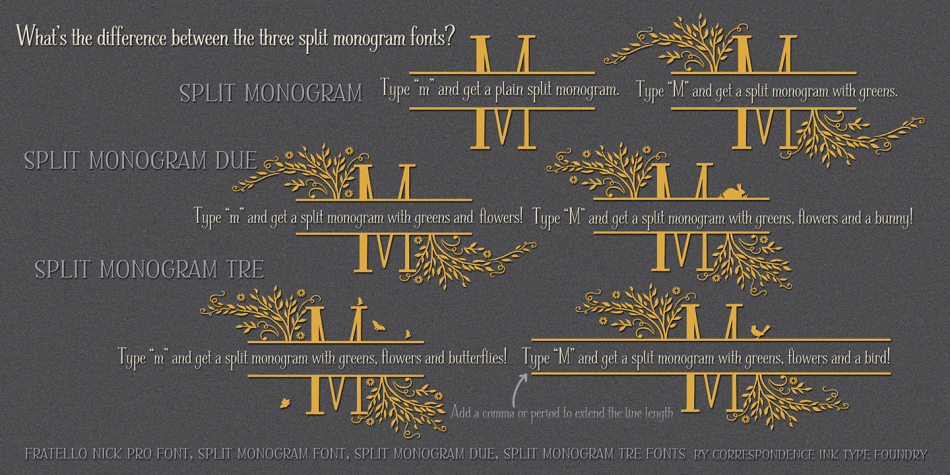 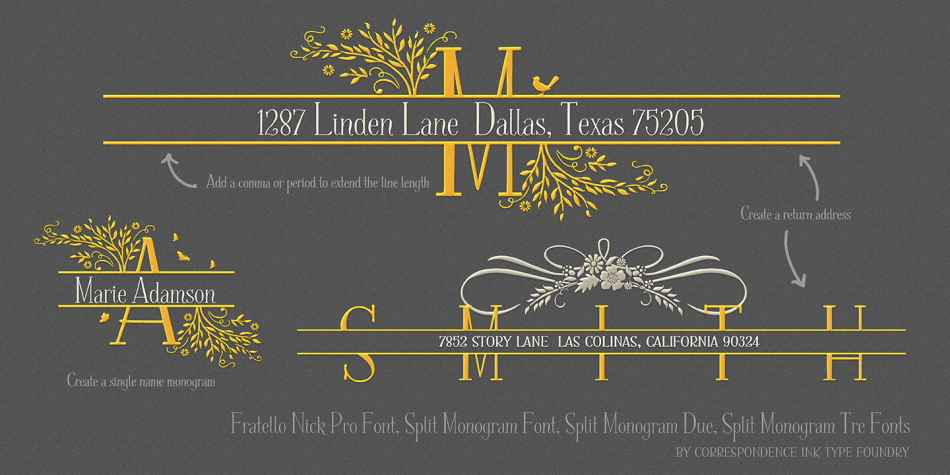 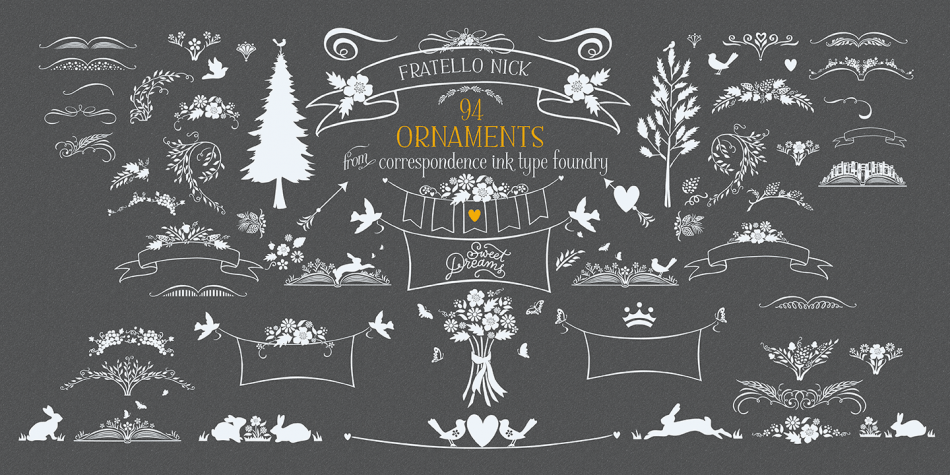 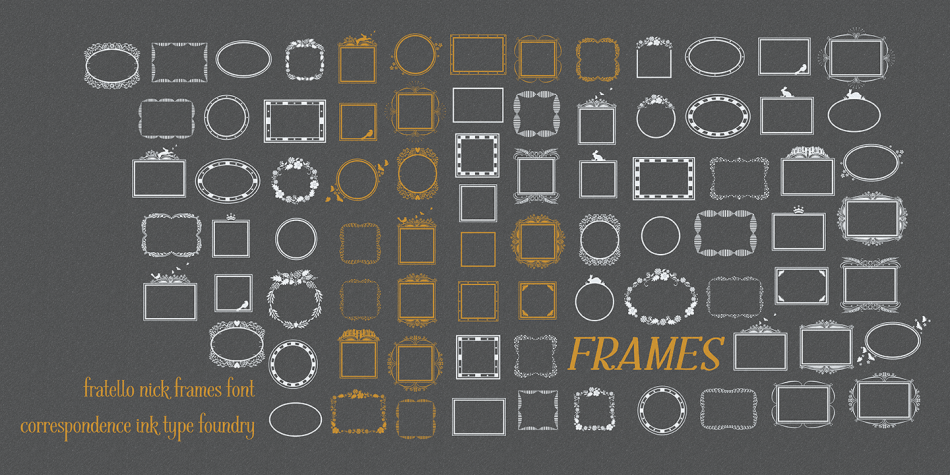 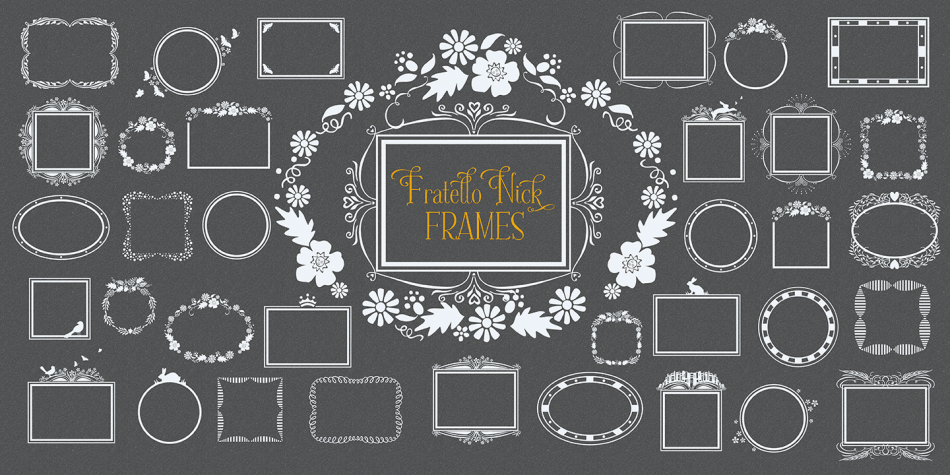 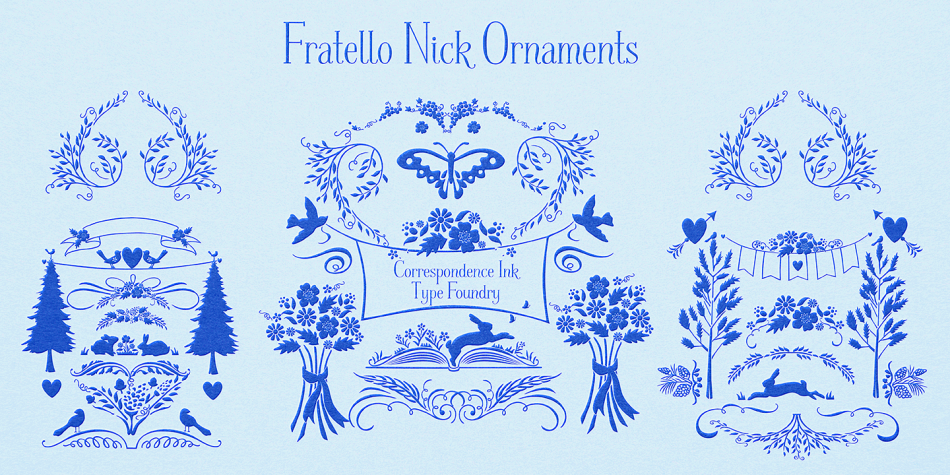 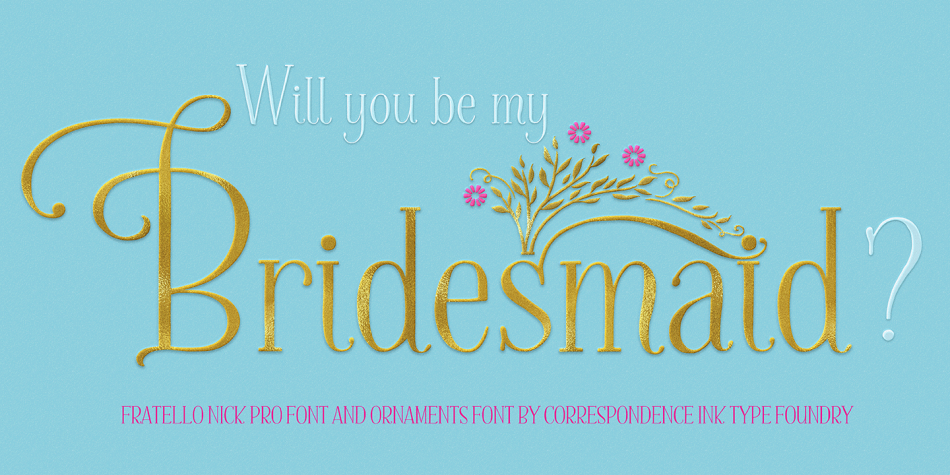 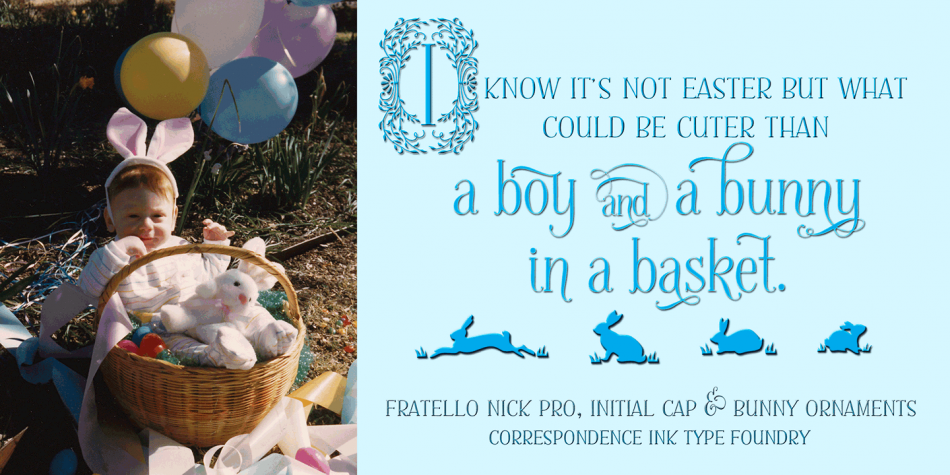 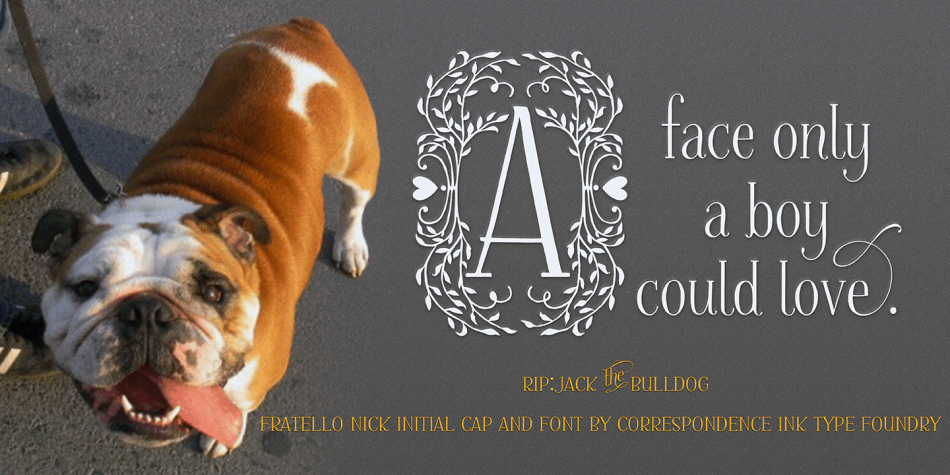 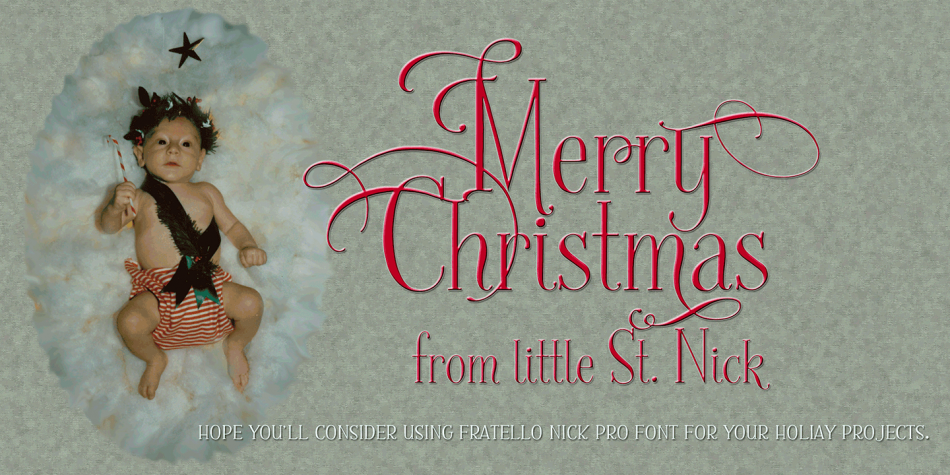 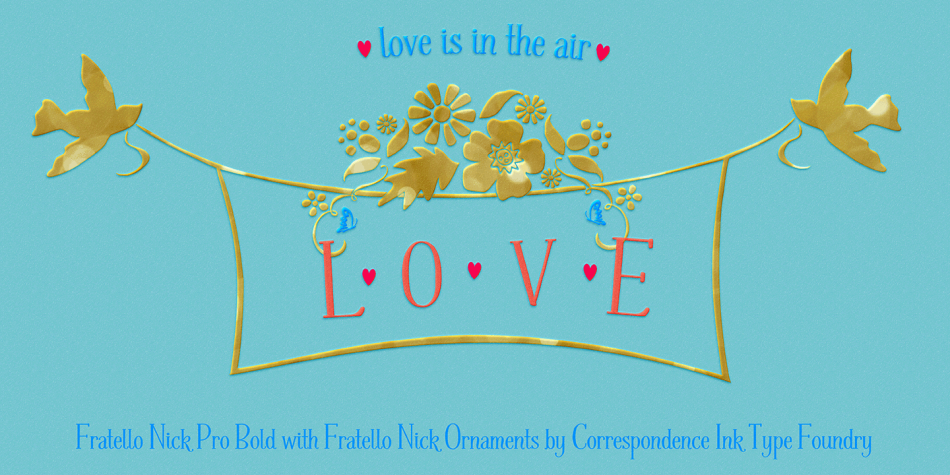 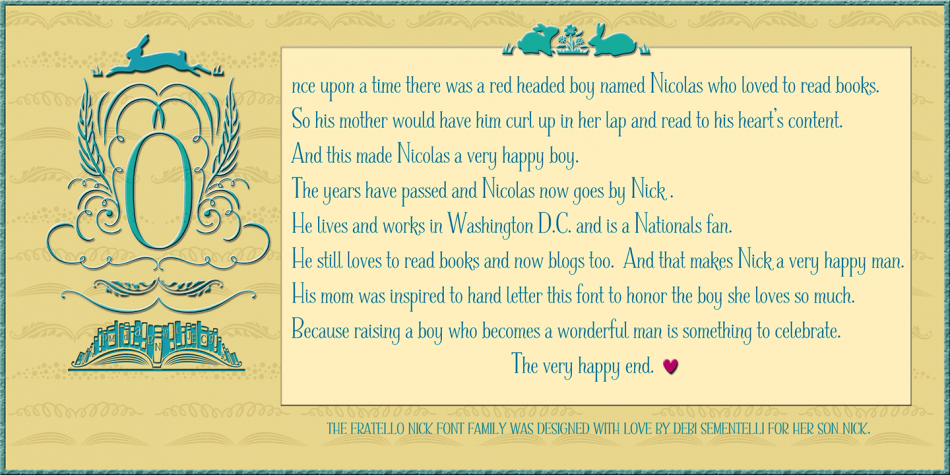 Designed by Debi Sementelli and Brian J. Bonislawsky, Fratello Nick is a multiple classification font family. This typeface has fifteen styles and was published by Correspondence Ink. 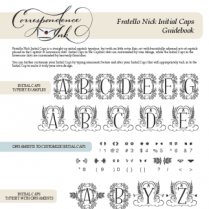 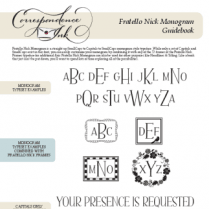 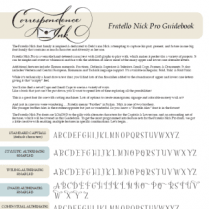 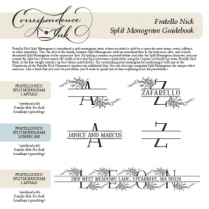 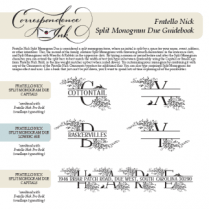 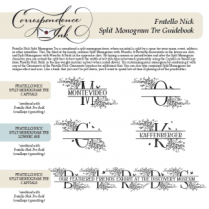 Fratello Nick is a hand-lettered text with 1160 glyphs to play with. It was inspired by my beautiful red-headed son Nick. (Read the inspiration behind the font below.)

There are 15 fonts in the family. Both the Regular and Pro come in a variety of weights: Regular, Bold, Italic and Bold Italic.
Also included are fun accessories like Initial Caps, 94 ornaments, 82 frames, two sets of Initial Caps (one allows you to insert special ornaments in the side insets!), a 3-letter Monogram font and three different Split Monogram fonts! (Each one has two different options when you type using upper or lower case… plain, flowers, bunnies, birds and butterflies!)

It can be simple and sweet or bring a touch of flair and whimsy to your project with any of its fun alternate letters. There are nine different uppercase alphabet sets!

Here’s the story of the inspiration behind the font:

Once upon a time, there was a red headed boy named Nicolas who loved to read books. So his mother would have him curl up in her lap and read to his heart’s content. And this made Nicolas a very happy boy.

The years have passed and Nicolas now goes by Nick. He went to college in Washington, D.C. where he was a handler for Jack the Bulldog ( R.I.P.) and became a Nationals fan. He lives and works there and knows the Metro like the back of his hand. But he can smoke a rack of ribs like the true Texas boy he is. He still loves to read. And that makes Nick a very happy man.

His mom (me) was inspired to hand letter this font to honor this boy she loves so much. Because raising a boy who becomes a wonderful man is something to celebrate.

The moral of the story? Cuddling with books always leads to good things.

I hope Fratello Nick will be a part of helping you create stories of your own.

Birds, butterflies and bunnies included in the font remind me of the themes of many of the bedtime stories we used to read. And now that Nick is of the marrying age, there are cool Ornaments, Initial Caps, Frames and Monograms that would work well for wedding invitations. But who’s rushing anything:)

While it’s technically a hand drawn text font, you’ll find lots of fun flourishes added to the abundance of upper and lower case letters giving it that “scripty” feel.

You’ll also find a set of Caps and Small caps to use in a variety of ways. Easily combine the Monogram font with one of the 82 frames to make it unique.

Like a book that just can’t be put down, you’ll want to spend lots of time exploring all the possibilities!

By the way, fratello means “Brother” in Italian. Nick is one of two brothers. His younger brother Alex is the extreme opposite but just as wonderful. So you know a “Fratello Alex” font is in the future!

For cutting machine crafters I specifically designed the letters at a good width for cutting and made sure the ornaments are ready to be created in multi color. You’ll also love the many options available to create framed monograms or signage and designs for all of your projects.