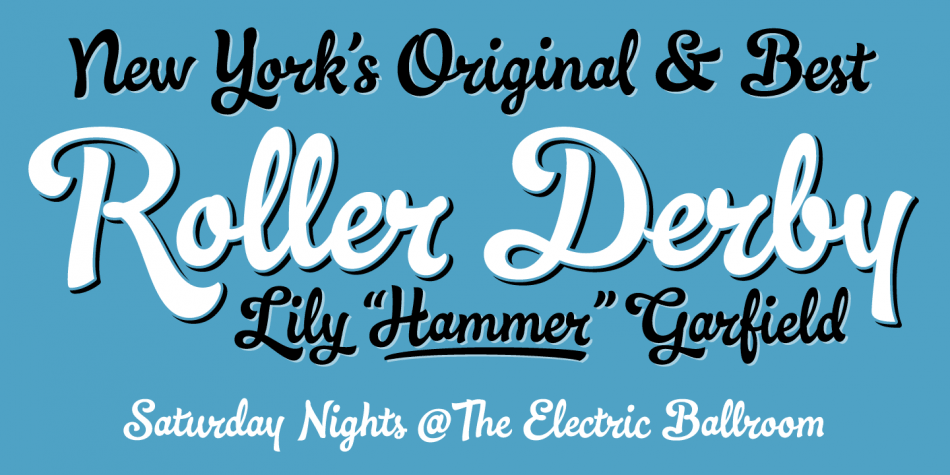 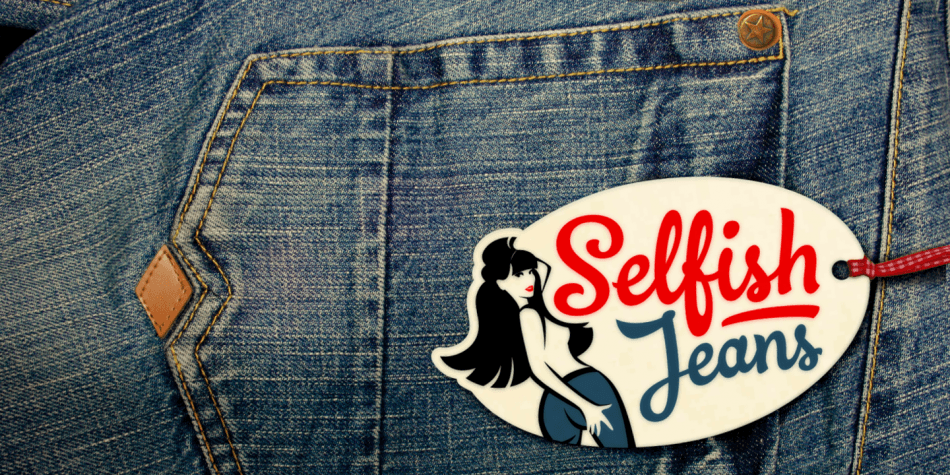 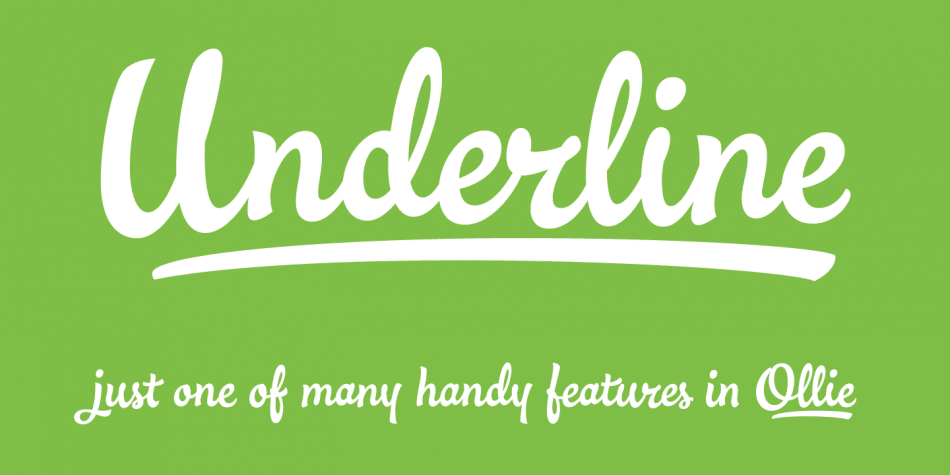 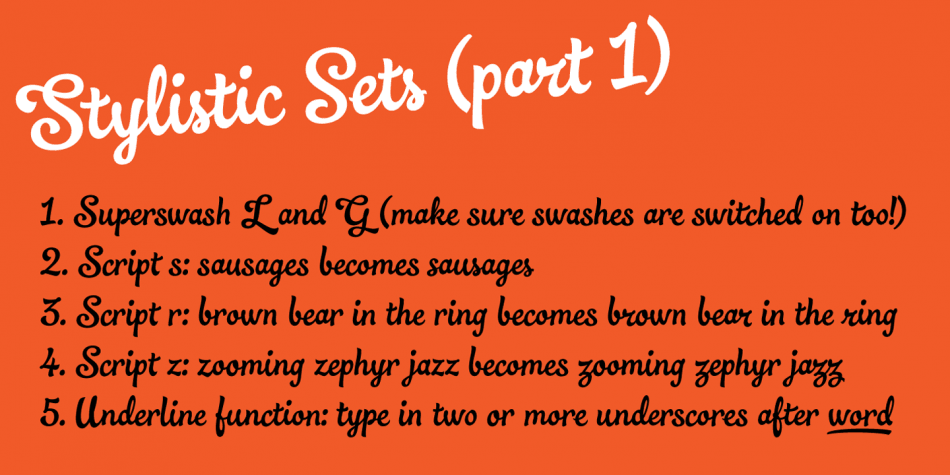 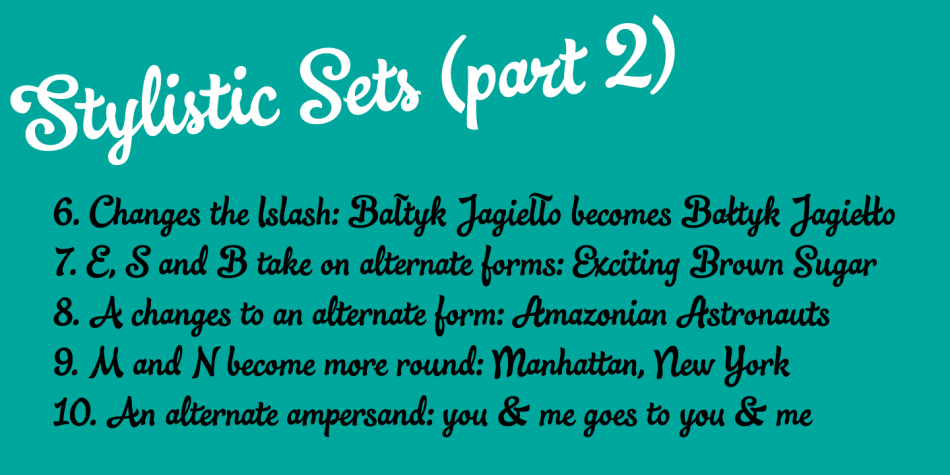 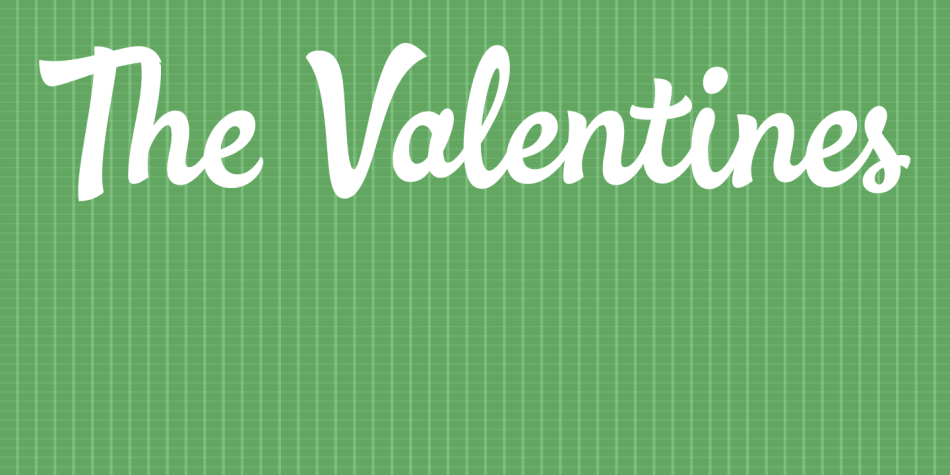 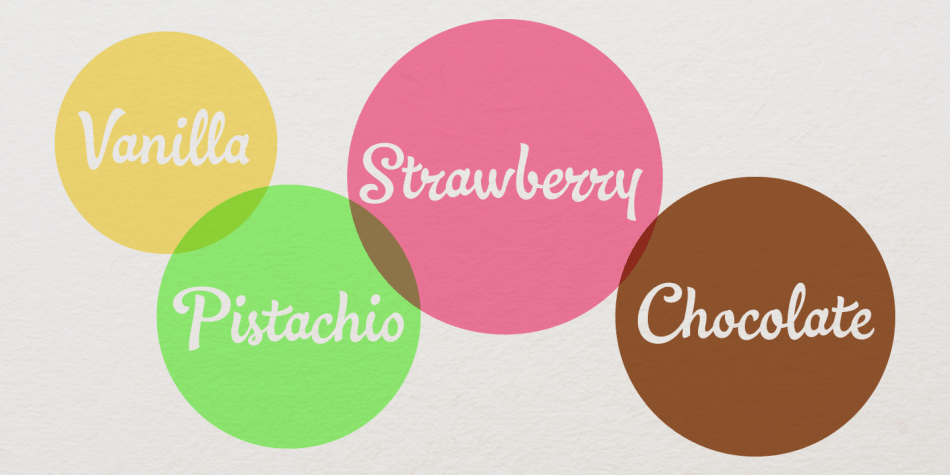 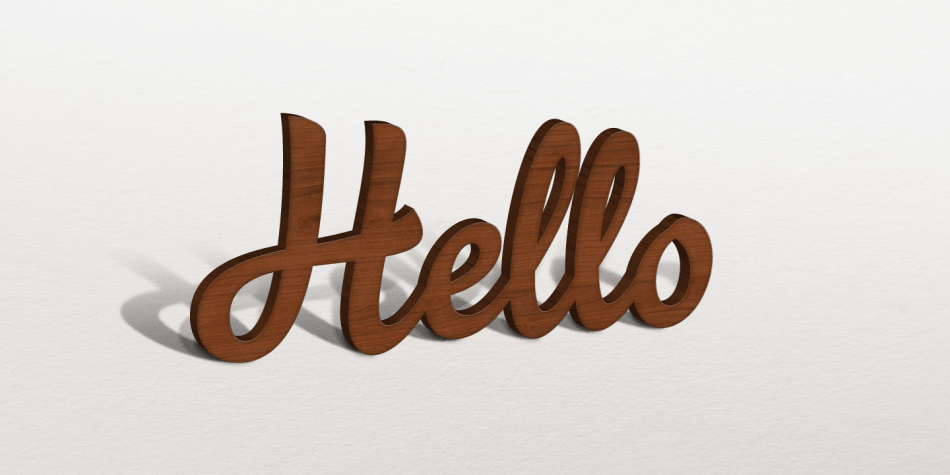 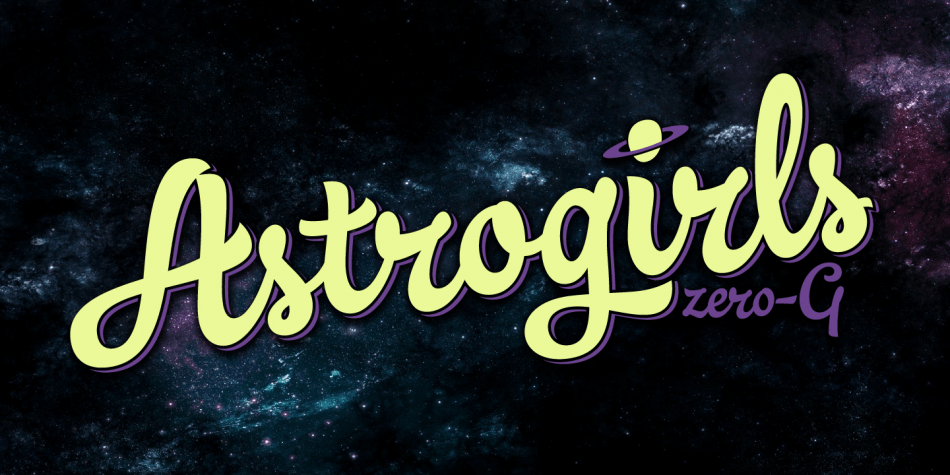 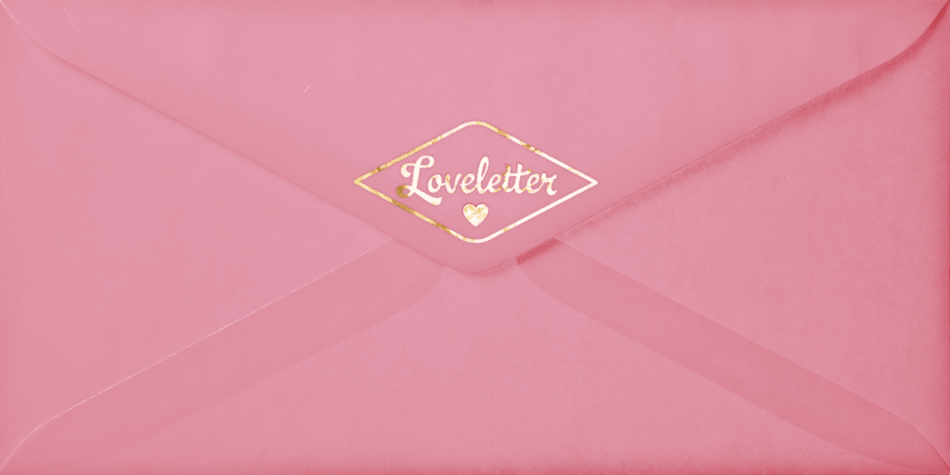 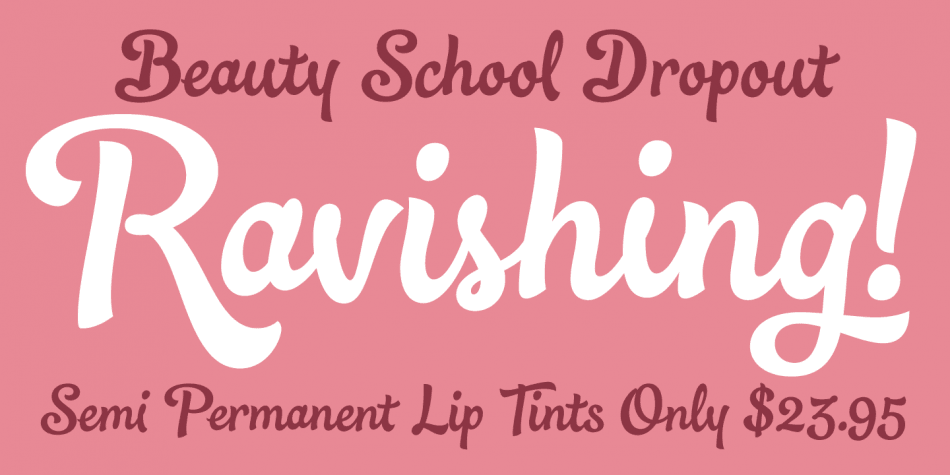 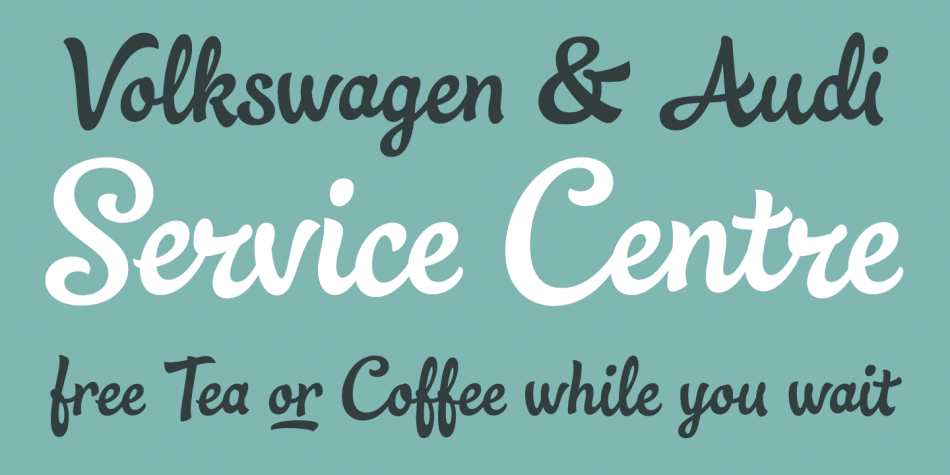 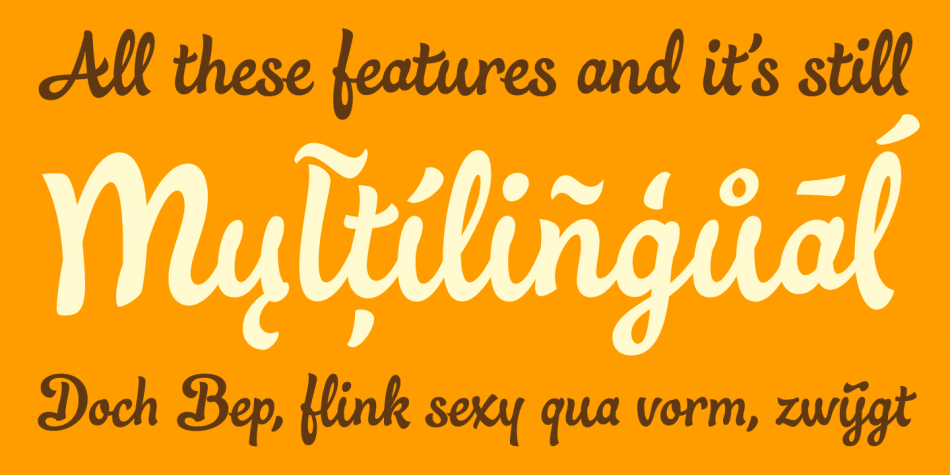 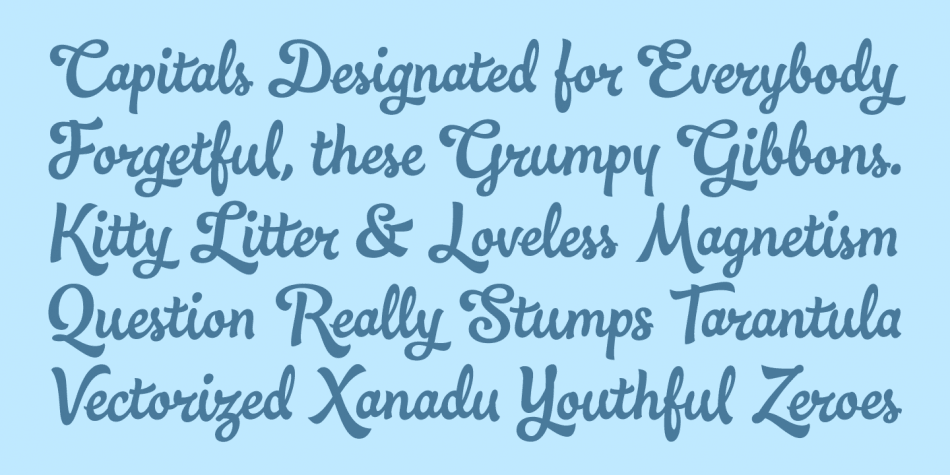 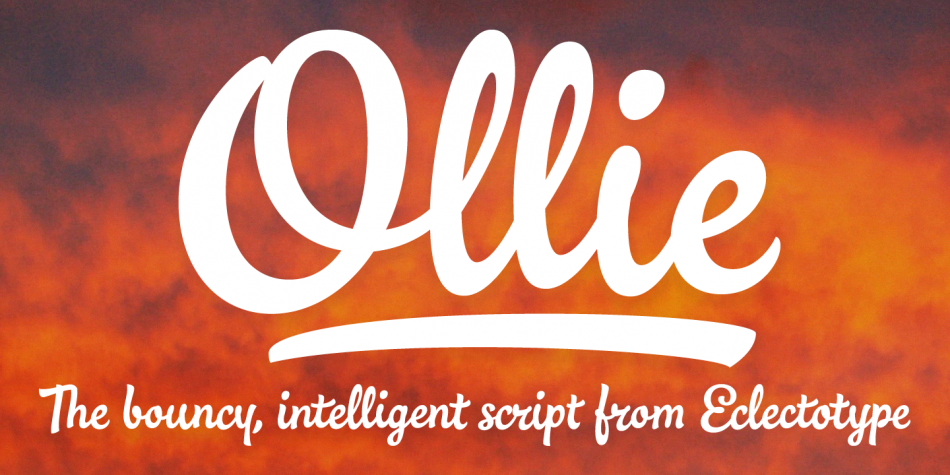 Ollie is a brush script font published by Schizotype Fonts.

Meet Ollie, a casual signage script whose friendly, bouncy exterior belies a heart of sophisticated OpenType programming. This font is designed to make the most of OpenType savvy applications, and as such is recommended for professional design use. Or to put it another way: Make sure that contextual alternates and ligatures are always turned on!
Ollie includes about 900 glyphs, many of which are automagical substitutions to keep the text flowing smoothly, and to pseudo-randomly pick different glyphs to avoid repetition. With contextual alternates turned on (as they should be by default), most lowercase letters will alternate between at least two different forms. The powerful OpenType programming makes the font itself ‘look back’ (up to eight characters) on previously used letters; typing “banana” will give you three different a’s and two different n’s (the last a is a special ‘end form’ character).
The calt feature controls many other ‘special effects’ which all add together to give a smooth-flowing, hand-lettered look. These effects include start and end forms (and indeed, ‘loner’ forms) of many letters, which are automatically substituted in at beginnings or ends of words, or when the previous or next letter doesn’t connect. Another special feature tests to see if there is room for the crossbar of t (or tt ligature) to extend further over the previous or next letter, or both, as is often the case. The last main effect of the calt feature is to substitute certain letters typed before any ‘e’ character, to make for a more natural connection (see the pe combination in ‘Schizotype’ in the first poster).
Ligatures should be on by default, for a much nicer looking tt combination, and a few others besides.
The swash feature should be used sparingly (one glyph at a time, really) to apply a more extravagant look to g,j and y in the lower case, and quite a few of the upper case too.
Oldstyle figures are included, as well as the lining defaults.
Now to delve into the stylistic alternates… These are all included in the salt feature, or for uses of applications that support them, separated into stylistic sets thus:
ss01 - (with swash feature on) L and G swashes get even swashier.
ss02 - standard s changes to a connected script s form.
ss03 - r takes on a script form.
ss04 - z also gets a scriptier look.
[the previous three sets also change any versions of s, r or z with diacritics]
ss05 - a useful underline function. When enabled, typing two or more underscores will extend a cool underline under the previous letters. More underscores = longer underline.
ss06 - the Polish script lslash changes to its more standard form.
ss07 - E, S and B change to a more top-heavy alternate form.
ss08 - An alternate form for A characters.
ss09 - Alterative rounder forms of M and N.
ss10 - An alternate ampersand.

That about wraps up the features. Now all that’s left is for you to license the font and get experimenting!