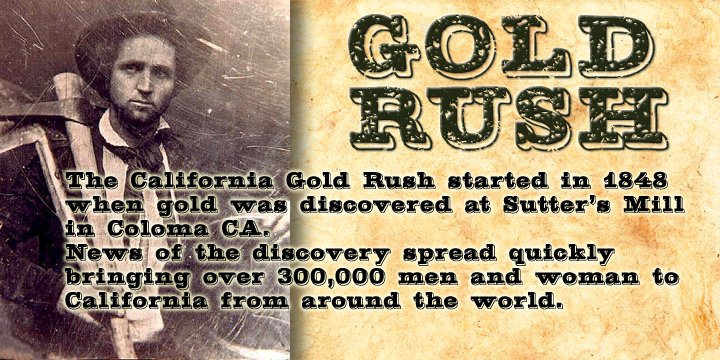 Gold Rush is a western and display slab font family. This typeface has four styles and was published by FontMesa.

This old classic font has an interesting history, it was originally cut with lowercase by the Bruce Type Foundry in 1865 and listed as Ornamented No. 1514. Around 1903 the Bruce foundry was bought by ATF, in 1933 this font was revived by ATF as Caps only and was given the Gold Rush name but was sometimes called Klondike.

A similar version of this font with lowercase and radiused serifs was produced by the James Conner’s Sons Type Foundry around 1888. In the past other foundries such as the Carroll foundry, Type Founders of Phoenix and the Los Angeles Type Foundry have produced an all caps version of this font.
After examining several printed sources of this font from more recent books I found that the original from Bruce’s 1882 book was by far the best in design quality, it was also the only printed source that included the lowercase.

New open faced, ornamented and distressed versions have been added to this old classic font, there are also many extended characters for Western, Central and Eastern European countries.

The Gold Rush Trail OpenType version has alternate double letter pairs included in the font and will automatically be substituted when used in Adobe CS products or other software that takes advantage of OpenType features.

Also available is a spurred version of this font listed under the name Gold Spur.