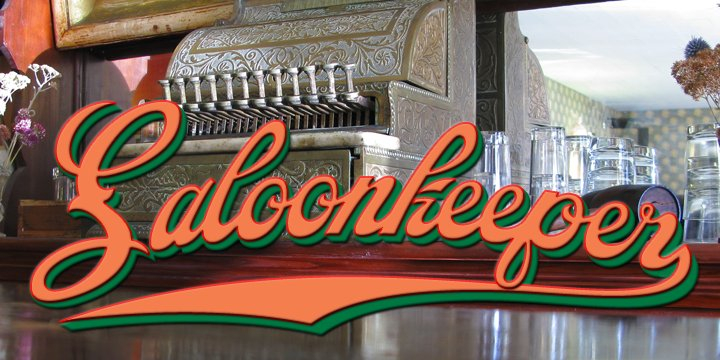 Saloonkeeper is a dingbat and script font family. This typeface has six styles and was published by FontMesa.

Saloonkeeper, with its western looking spurs, was inspired by the Leinenkugel’s brewing label.

The Saloonkeeper Pro font family introduces something new for script fonts, it’s called the Shadow Layer font, script fonts have connecting letters and this makes it difficult or impossible to create an open faced shadow version and make the letters connect in proper alignment with each other. The solution was simple make a separate font for the shadow that’s in registration with the first font, you must use an application that allows you to work in layers in order to take advantage of this special font.
The Shadow Layer font was designed to give the letters a cast or extruded shadow appearance that you would find in sign lettering versus the standard drop or offset shadow that can easily be created in most graphic arts programs.

Disclaimer: The FontMesa fonts that were inspired by famous company logos although very accurate in detail have not been approved as official art work by the companies which logos they’ve been patterned after. They were created for entertainment purposes and if you plan on using the famous logos from these fonts for any legitimate or commercial purpose then it is recommended that you contact those companies and request guideline information along with their official artwork.