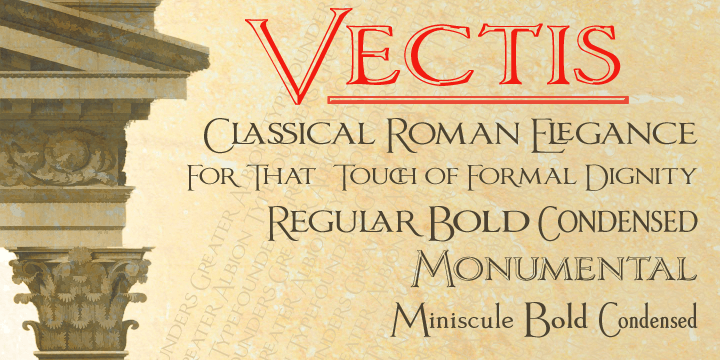 Vectis is a historical and display serif font family. This typeface has seven styles and was published by Greater Albion Typefounders.

Vectis, named in honour of the Roman settlement on Britain’s Isle of Wight, brings a fresh approach to the classic simple elegance of ancient Roman faces.  Vectis is offered as a small caps face designed to add a fresh hint of character to this style of classical design.  Vectis can lend a note of formal dignity to any design project or poster and is ideal for clear headings and titles with a traditional feel.  Two weights are offered, regular and bold, as well as a range of alternate letterforms and ligatures.  This popular family has now been expanded with the incised ‘Monumental’ display face, and well as ‘miniscule’ lower case forms and condensed widths.