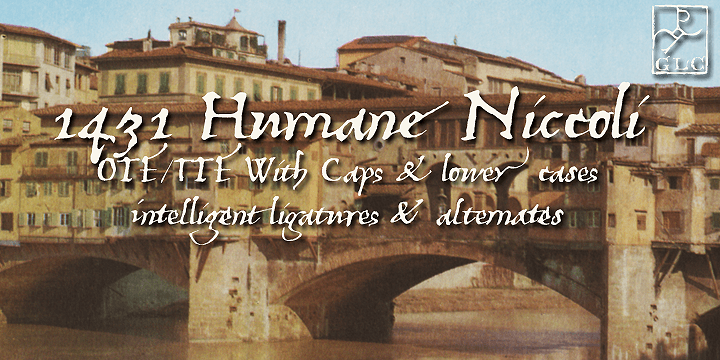 1431 Humane Niccoli is a historical and script font published by GLC Foundry.

Niccolo Niccoli (1364-1437) was a wealthy bibliophile and an acclaimed scribe, in Florence (Italy). He was one of the most important Italian calligrapher in this early time of rediscovering Roman script. Of rare accomplishment was his adaptation of the so called Italian humanistic minuscule script. We were inspired from his late work to create this present Font.
We have added a lot of accented and other characters (U/V, I/J…) who was not existing in the original and replacing “long s” by a small “s” for a modern use.
The OTF encoding was used for intelligent alternates, permitting to use different forms of the same lower case or capital in a single word, reproducing easily the charming variety of a real manual scripture. Halas, it is too much to be encoded in MacTT font, so this one is only available in TTF and OTF files.