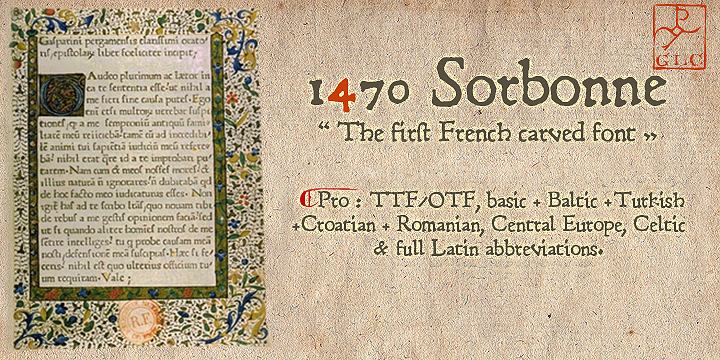 1470 Sorbonne is a historical font published by GLC Foundry.

This family was created inspired from the first font carved and cast in France, for the Sorbonne University’s printing workshop (Paris). The characters was drawn by Jean Heynlin, rector of the university - inspired from Pannartz’s - and in all probability was carved by Adolf Rusch. It has only one style, in one size (about 14 Didots points). We have added the U, J, W and Y, some accented characters and others not in use in the original, but the standard and historical ligatures and the numerous Latin’s abreviations are these of the original font.
TTF and OTF available for standard basic Latin plus Central Europe, Baltic, Turkish, Croatian, Romanian, Celtic.