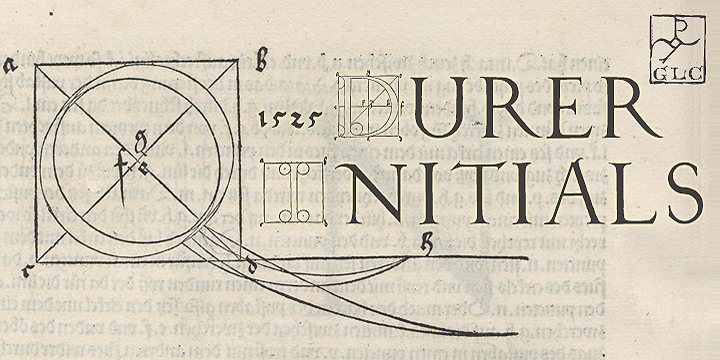 1525 Durer initials is a monograms and historical font published by GLC Foundry.

In 1525, Albrecht Dürer, the well known German great artist, was publishing the so called “Underweysung der Messung mit dem Zirckel und Richtscheyt”, printed in Nuremberg. This handbook explain with numeral figures how to drawn with compasses and ruler. A large part is devoted to the drawning of Roman characters, who can be used as decorative initials.
We are offering here two complete historical initial sets, and more : we have entirely redrawned the lacked letters : J, U and W, Eth, Lslash, Thorn and Oslash in the two forms, using the Dürer style.

The font may be used with all our Humane and Garalde fonts, like “1543 Humane Jenson” or “1592 GLC Garamond” and other, from the GLC foundry catalog.