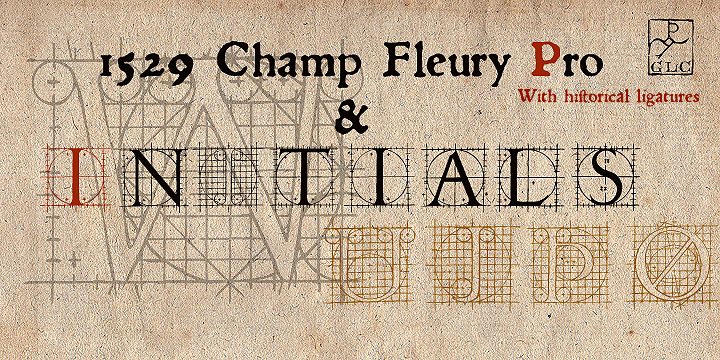 1529 Champ Fleury Pro is a monograms and historical font family. This typeface has two styles and was published by GLC Foundry.

In 1529, Geofroy Tory, French scholar, engraver, printer, publisher and poet, was publishing the well know so called “Champ Fleury”, printed by Gilles de Gourmond, in Paris. It is a fully illustrated handbook where the author explains how to draw Roman characters. The font used for the text - an Humane/Jenson type - was not a very beautiful one, but rough and ready, but the book is well known for its Capital letters designs.
We are offering here the two complete historical type sets, and more: we have entirely redrawnn the lacked letters: J, U and W, Eth, Lslash, Thorn and Oslash in the two initial forms. The text font “1529 Champ Fleury Regular” is now containing all characters for West European (including Celtic), Baltic, East and Central European and Turkish language, and the Initial set “1529 Champ Fleury Initials” is containing two complete alphabets, with a very great effort to be as close as possible to the original pictures.