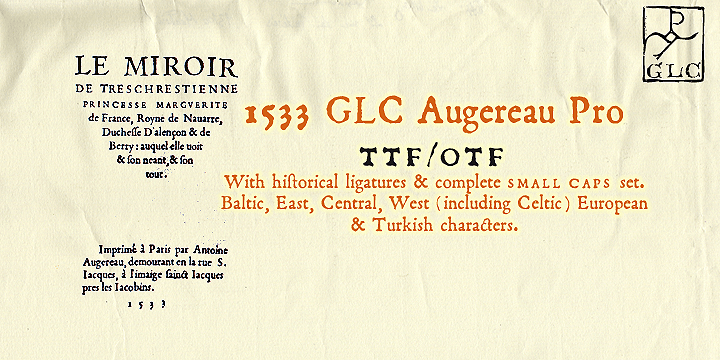 Antoine Augereau (circa 1485-1534)was a punchcutter before to be a printer in Paris, one of the first French who engraved roman letters, when the French printers were mostly using blackletters. He began to work for Robert Estienne, one the first Parisian printer to use this types. He is the principal punchcutter who create the Garalde type, perfected by Claude Garamont, his pupil.

Our font is inspired from one of his three roman typeface : the “Gros Romain” (±16 Pts) size, used in 1533 to print “Le miroir de l’âme…”, a religious poetical compilation by Marguerite de Navarre, sister of the French king François the first.
It seems that Augereau had also engraved italic styles, but there is not any certainty about. Our “1689 GLC Garamond Pro” italic style may be used without anachronism.

The alphabet, with his complete small caps collection, is covering all West, East and Central European languages (includind Baltic and Celtic)and Turkish.