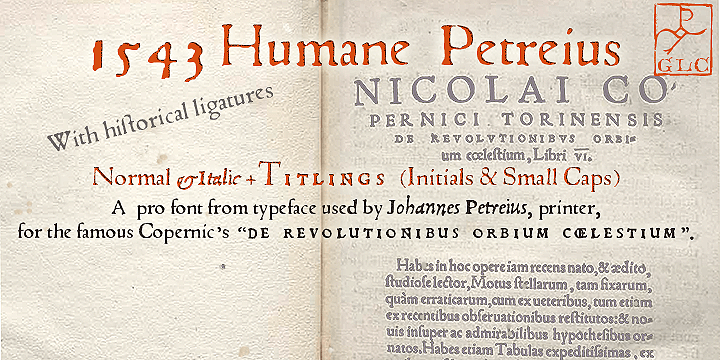 1543 Humane Petreius is a grunge and historical font family. This typeface has three styles and was published by GLC Foundry.

The Regular style of this family was created inspired from the typeface used in Nuremberg (Germany) by Johannes Petreius for print in 1543 the famous “De Revolutionibus Orbium Coelestium”, the well-known Mathematical and Astronomical essay by Nicolas Copernic. Petreius was using also an original Italic Style, as for the “De Sculptura” by Gaurico Pomponio, in 1542. Unfortunately, nobody seems to know who was the punchcutter of this Jenson-style font. In supplement is a Title file, containing Initials (without diacritics) and SmallCaps (with diacritics).
In our three styles (Regular & Italic + Titling), fontfaces, kernings and spaces are as closely as possible identical to the original.  This Pro font is covering Western, Eastern and Central European, Baltic and Turkish languages, with standard and “s long” ligatures in Regular and Italic styles. Both have twin letters ligs but Italic style has a special extra (genuine) of f and t with vowel ligs.