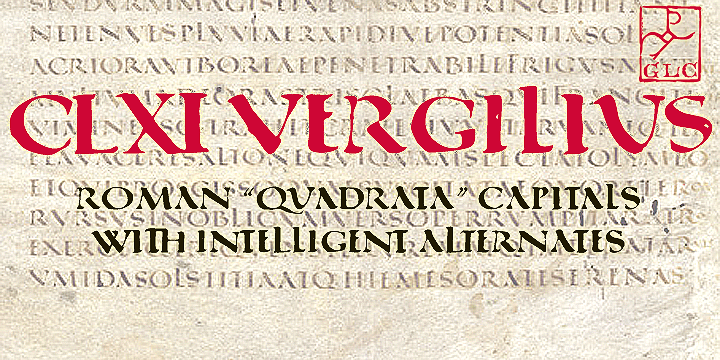 161 Vergilius is a historical font published by GLC Foundry.

This font was inspirated from the rare manual Roman “Quadrata” used by an unknown scribe to wright a copy of Latin poet Virgil’s “Georgiques”, around years 161 to 180 BC. Only a few sheets have survived, now preserved by different libraries in the world.
We have created the font as to be adapted for contemporary users,  making difference between U and V, I and J, which has not any relevance for ancient Latin scribes, and naturally with Thorn, Oslash, Lslash, W, Y… and usual accented characters and punctuation, who was no more existing by the time. There was only capitals in the original, so, each caracter A-Z and a-z may be interverted to give a plaisant appearence of manual script with various alternates for a same glyph. We have added the Roman numerators “I V X L C D M” in the OTF/TTF versions, with usual combinations,  usable as “Old Style Numerals” alternates.