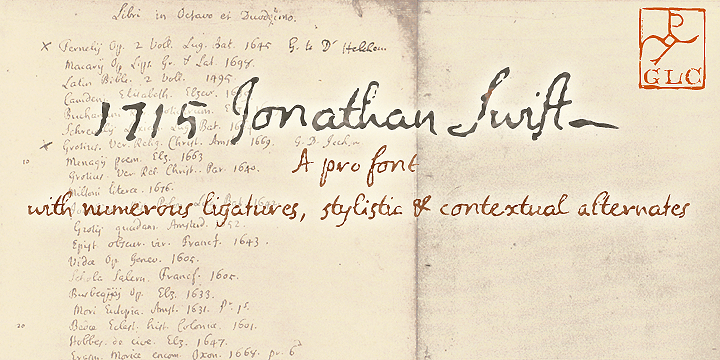 1715 Jonathan Swift is a historical and script font published by GLC Foundry.

The famous Irish poet and novelist Jonathan Swift (Dublin 1667-1745)has a large personnal library of which he noticed carefully the book list by himself.  We have used a facsimile from this catalogue to reconstuct this present font, as one exemple of the personnal poet’s hands but also as a typical exemple of the British quill pen handwriting from about mid 1600’s to the beginning of 1700’s .
It is a “Pro” font containing Western (including Celtic) and Northern European, Icelandic, Baltic, Eastern, Central European and Turquish diacritics.  The numerous alternates and ligatures allow to made the font looking as closely as possible to the real hand. Using an OTF software, the features allow to vary automaticaly almost each character of a word without anything to do but to select contextual alternates and standard ligatures and/or stylistic alternates options.