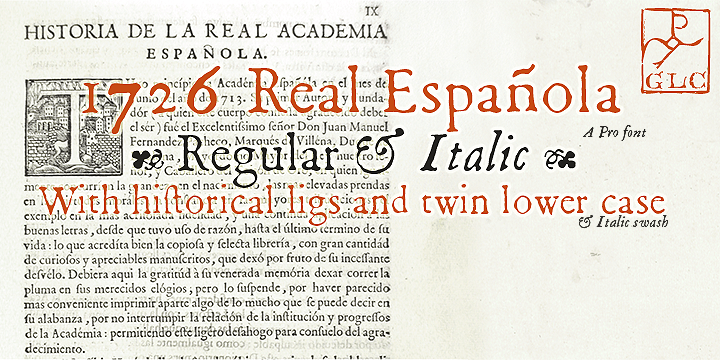 1726 Real Espanola is a historical font family. This typeface has two styles and was published by GLC Foundry.

This family was created inspired from the set of fontfaces used
by Francisco Del Hierro, to print in 1726 the first Spanish language Dictionnary from the Spanish Royal Academy (Real Academia Española, Dictionario de Autoridades) : These two Transitional styles are said to have been the first set of official typeface in Spain, like the French “Reale” (take a look to our “1790 Royale Printing”. In our two styles (Regular & Italic), fontfaces, kernings and spaces are as closely as possible the same as in the original.  This Pro font is covering Western, Eastern and Central European, Baltic and Turkish languages, with standard and “s long” ligatures, usual fractions and twin letters in each of the two styles and a few Italic swashes isnpired from the font used in 1746 by the same printer for an other edition from the Royal Academy.