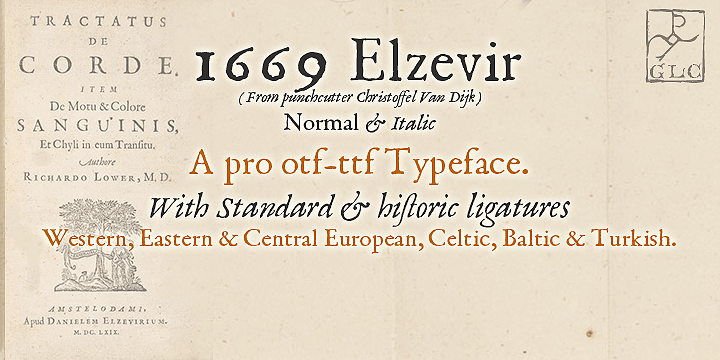 1669 Elzevir is a historical font family. This typeface has two styles and was published by GLC Foundry.

This family was created inspired from the set of fontfaces used in Amsterdam by Daniel Elzevir to print the famous “Tractatus de corde…” the study on earth anatomy by Richard Lower, in 1669. The punchcutter was the Dutch famous Kristoffel Van Dijk. In our two styles (Normal & Italic), fontfaces, kernings and spaces are scrupulously the same as in the original.  This Pro font is covering Western, Eastern and Central European languages (includind Celtic) Baltic and Turkish, with standard and “s long” ligatures in each of the two styles. The Roman (Normal) style is containing a U stylistic alternate, and the Italique style a A.