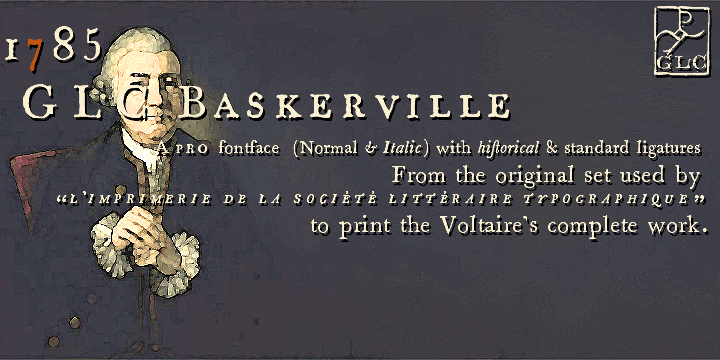 1785 GLC Baskerville is a historical font family. This typeface has two styles and was published by GLC Foundry.

This family was created inspired from the well-known Baskerville Roman and Italic typefaces created by John Baskerville, the English font designer. We were inspired from the original family sent by Baskerville’s wife after he was death. The Baskerville’s full collection was bought by the French editor and author Pierre-Augustin Caron de Beaumarchais who used it to print ó in swizerland ó for the first time the complete work of Voltaire (Best known as the “Kehl edition” by the “Imprimerie de la sociÈtÈ littÈraire typographique”). We have used this edition, with exemplaries from 1785, to reconstruct this genuine historical two styles. Fontfaces, kernings, spaces are scrupulously the same as in the original.  This Pro font is covering Western, Eastern and Central European languages (includind Celtic)and Turkish, with complete small caps set, standard and “s long” ligatures in each of the two styles.