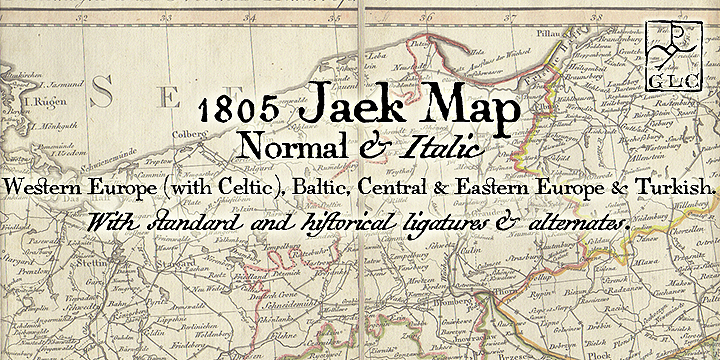 1805 Jaeck Map is a historical font family. This typeface has two styles and was published by GLC Foundry.

This font is mainly inspired from the engraved characters of a German Map depicting Germany’s roads and parts of surrounding lands, edited in Berlin probably in the end of 1700’s. The engraver was Carl Jäck or Jaek (1763-1808). The Map was baught by the French napoleonic general Louis Pierre Delosme (1768-1828)probably during the Napolenic campaign against Germany, circa 1805 or at least 1806, his sole staying in Germany.

The font (with two styles, Normal and Italic)is containing standard ligatures and a few alternative characters. It is a “small eye” or “Small x-eight” font, as the Maps’ characters are most often very small (some Italic lower cases of the map are 1mm hight, upper cases 2mm)