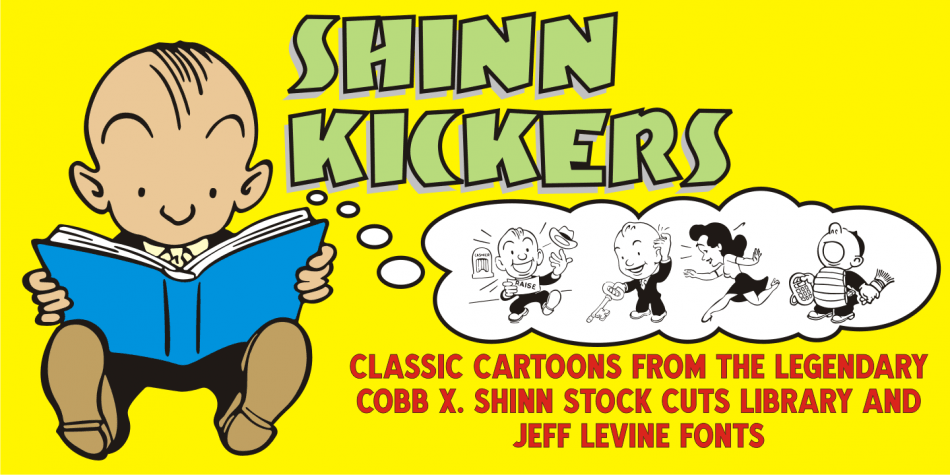 Conrad X. “Cobb” Shinn (Sept. 4, 1887- Jan. 28, 1951) was a Fillmore, Indiana-born post card illustrator who sold a series of successful novelty postcard lines which included (among others) Charlie Chaplin, automobiles and the Dutch culture in the beginning years of the 20th Century.

After serving in World War I, Shinn found the market for novelty postcards dwindling, and he also lent his artistic skills to cartoon features and illustrating many children’s books [including his own, under the nickname “Uncle Cobb”] which taught easy step-by-step drawing methods.

Some time in the 1920s, he eventually migrated into the field of supplying electrotypes and stereotypes of “stock cuts” of photos and line art to the printing trade.  In the days of letterpress printing, this was the forerunner of paper clip art and its successor, electronic clip art.

Purchasing many of his designs from “journeyman” artists of the time, the diversity Cobb Shinn’s stock cuts library grew with the passing years, reflecting changing times, styles and topics.

Upon his passing in 1951, it’s not known how long the Indianapolis-based company existed before finally closing its doors.

One of the more popular series of cartoons were the line illustrations of men and women affectionately called “little big head guys” by many modern fans of these cuts because the heads of the characters were drawn somewhat larger than the rest of their bodies.

Shinn Kickers JNL is a collection twenty-six of these illustrations, and just like a kick in the shin (as the pun in the name implies),  these charming cartoons get your attention.