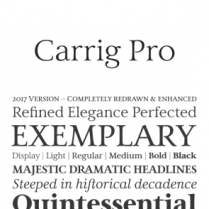 Carrig Pro is a refined and elegant serif. Classed as an Antiqua, Carrig Pro is borne from a hybrid of influences that range from early Roman inscriptions to type of the Pre-Modern era, giving Carrig Pro a distinctive character all of its own. Carrig Pro will appear instantly familiar and friendly and could well be the perfect typeface for those designers seeking to convey a message with a distinctive and prestigious air.

Now a 12-font family, Carrig Pro (2017) is an extended version of Carrig (2015), it has been completely redrawn, revised and improved. Carrig Pro has many useful features for typographers to exploit, such as easily accessible small caps, discretionary ligatures, gadzooks and stylistic alternates, as well as numerous ornamental glyphs. See more at the Carrig Pro microsite