Designed by Craig Stainton, SB Flip is a display font family. This typeface has fourteen styles and was published by SelfBuild Type Foundry. 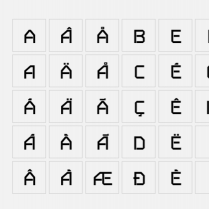 SB Flip is a square monoline sans-serif with stencil-like features and angular corners. It took its name from the way the corners were formed during the design process: the ‘folding’ of the horizontal and vertical stems form 45 degree angles at the corners, as if the letterforms were made from paper or tape. These letterforms were later boldened and stencil-like gaps added, and the typeface ended up with a much more militaristic feel than the early designs.

The resulting typeface has a mechanical, futuristic, industrial look that is well suited to gaming and technology themed projects or projects based around computing and electronics. It is designed primarily as an impactful display typeface and its strong geometry means it works well for magazine and poster headlines.