Designed by Ramiz Guseynov, Croog Pro is a display sans font family. This typeface has eight styles and was published by TipografiaRamis. 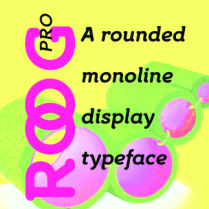 Croog Pro is an upgraded version of Croog fonts (2009). As its predecessor, new release is a rounded geometric monoline typeface, but built now in four weights with true italics. One more style has been added - “Black”, for display use. Squarish in proportions, monoline letterfoms gain more readability by having short rounded serifs and terminals. The typeface is ideal for use in display sizes, though is quite legible in text.

Croog Pro is released as OpenType fonts with extended glyph amounts, which enabled support of more Latin languages as well as Cyrillic languages, and includes some OpenType features.