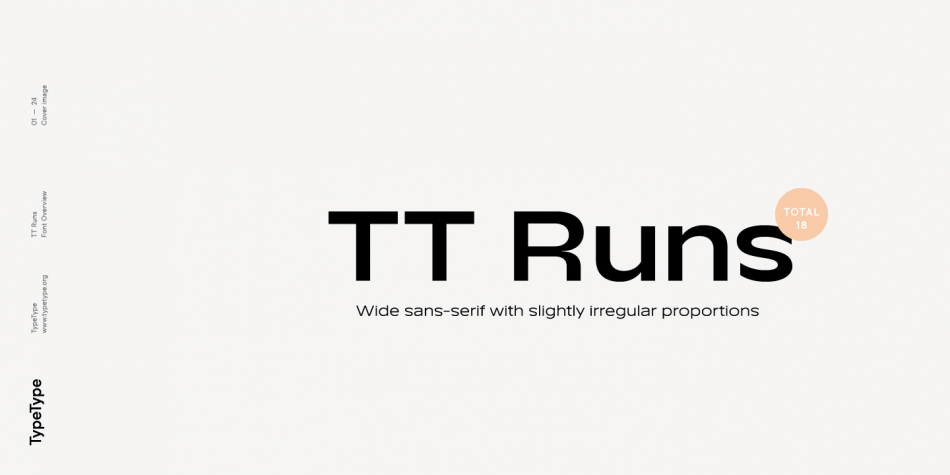 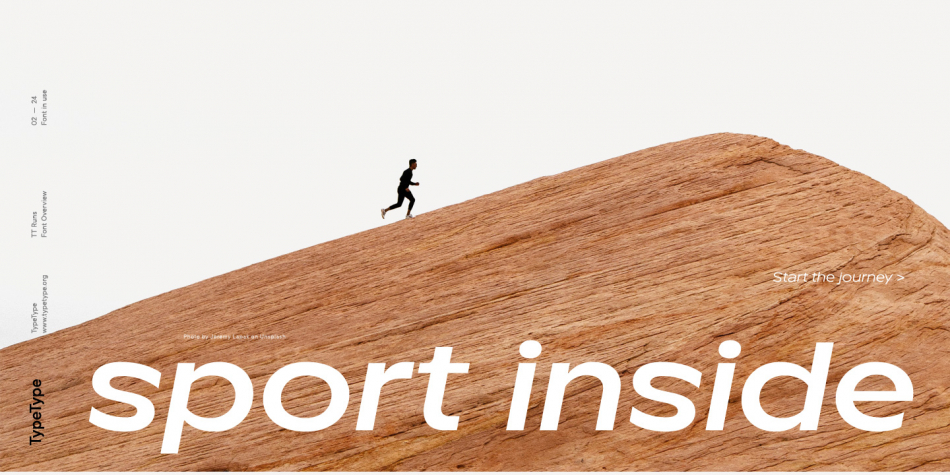 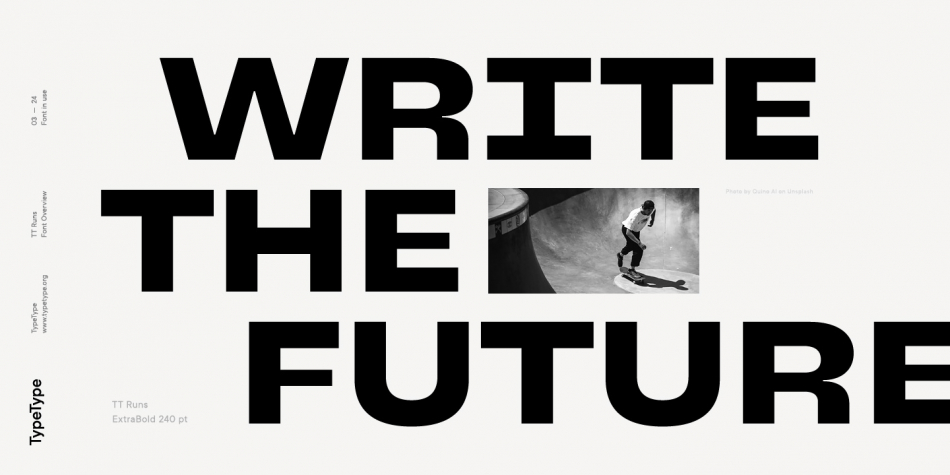 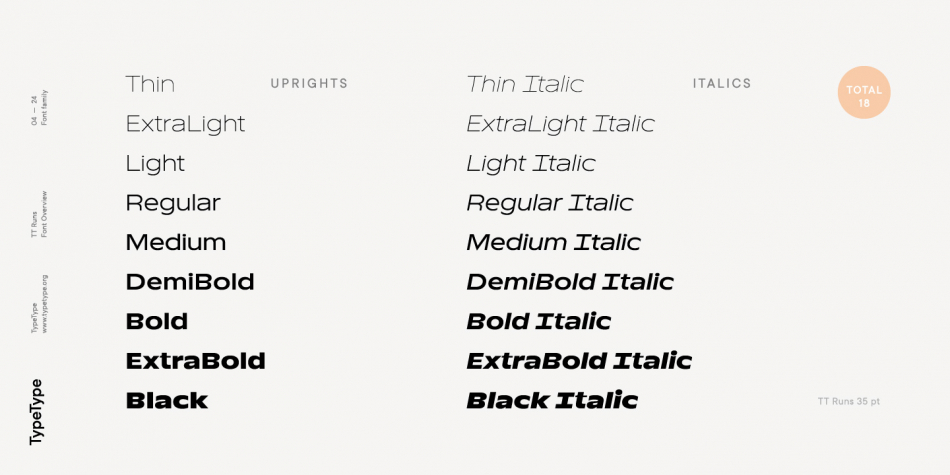 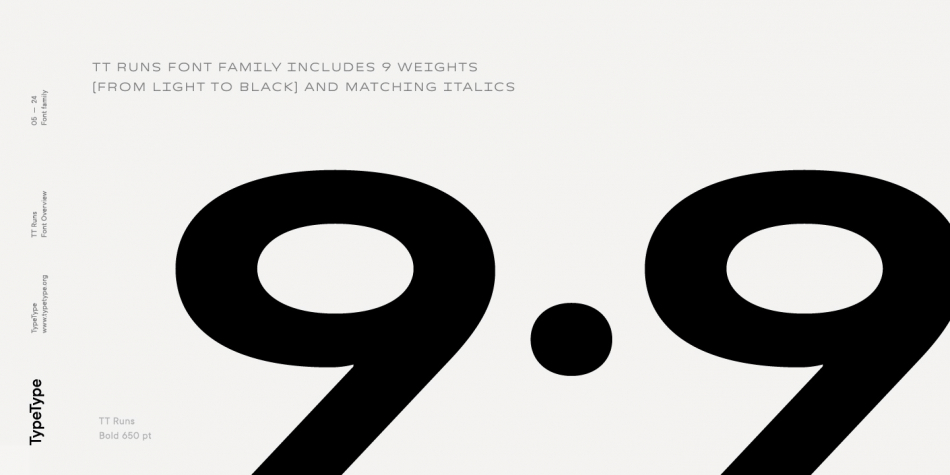 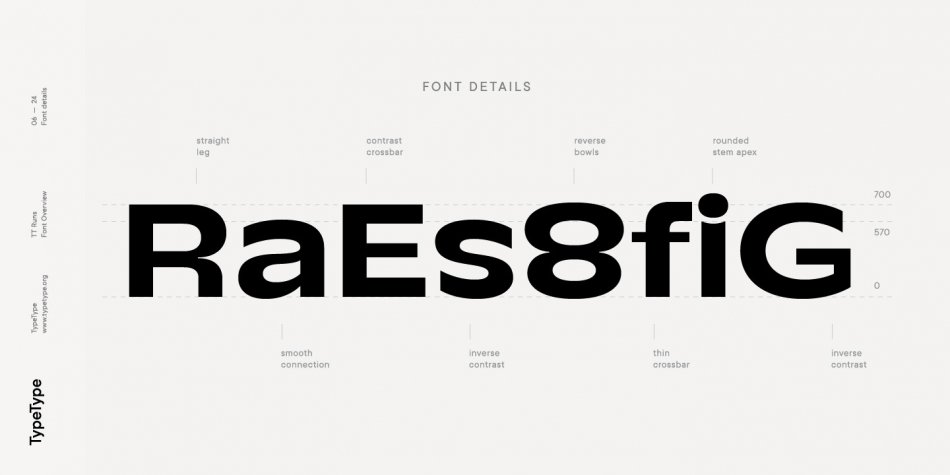 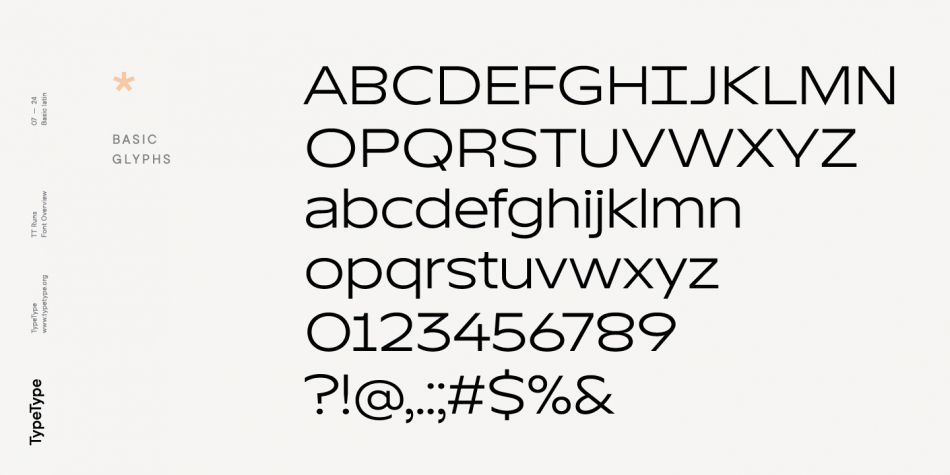 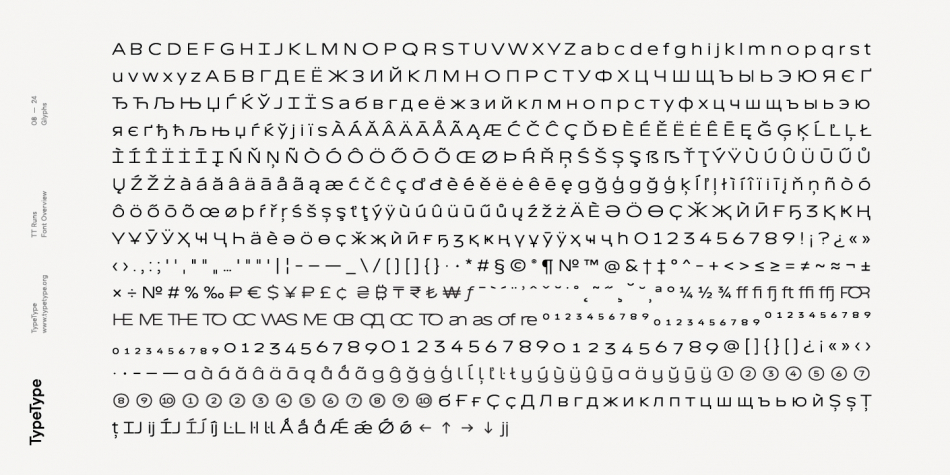 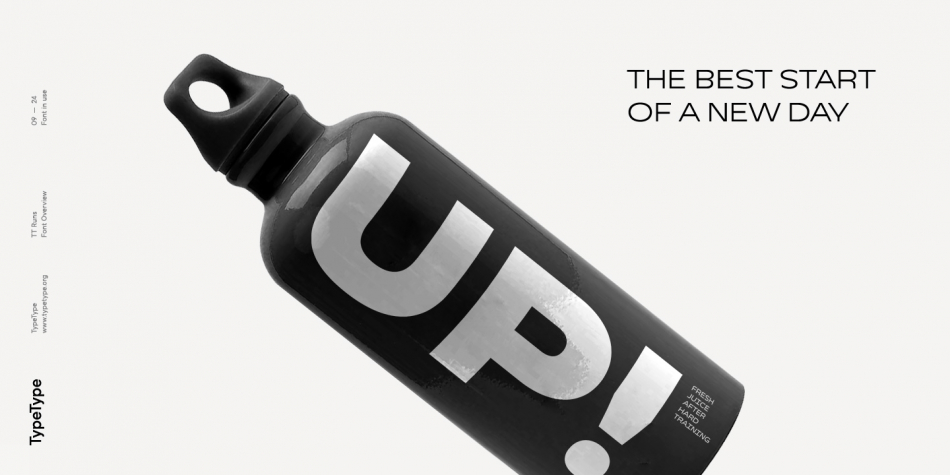 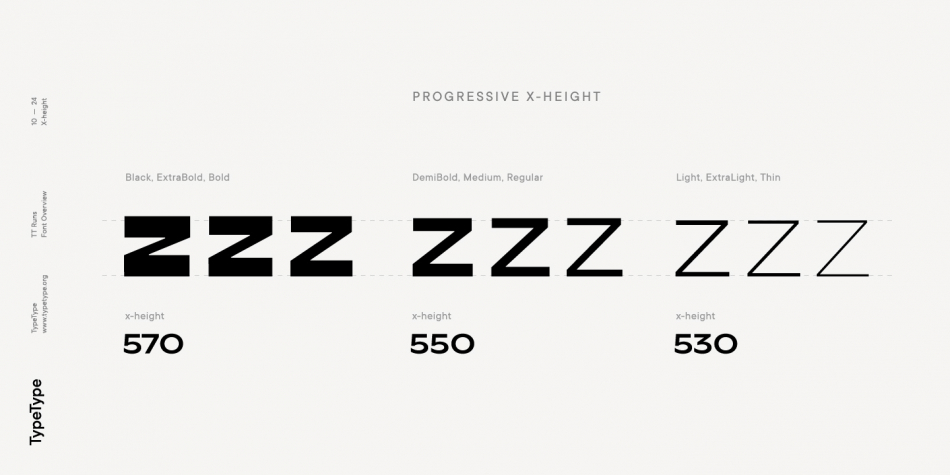 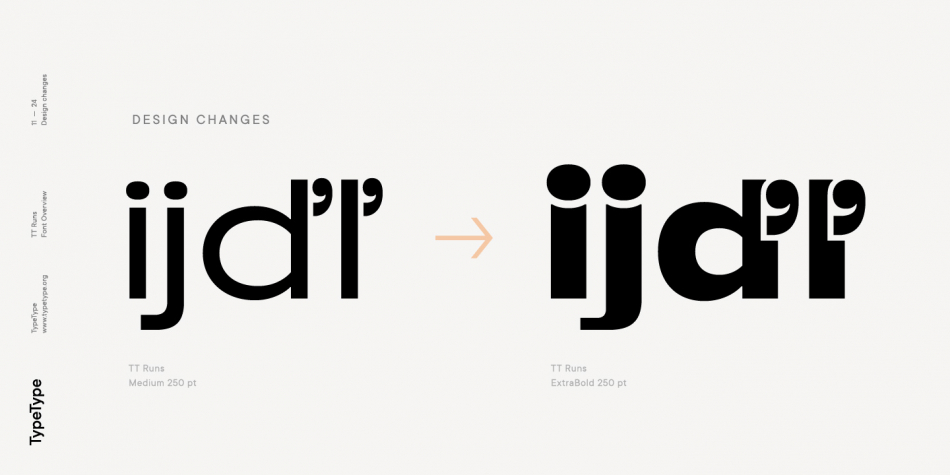 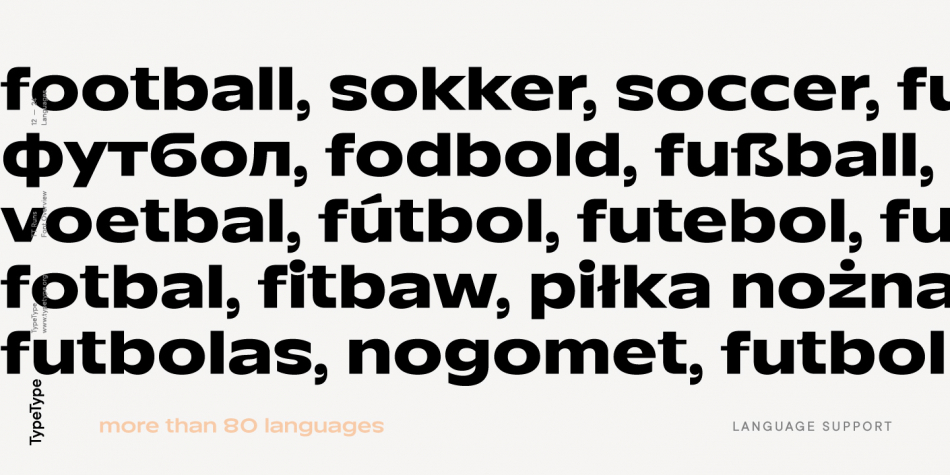 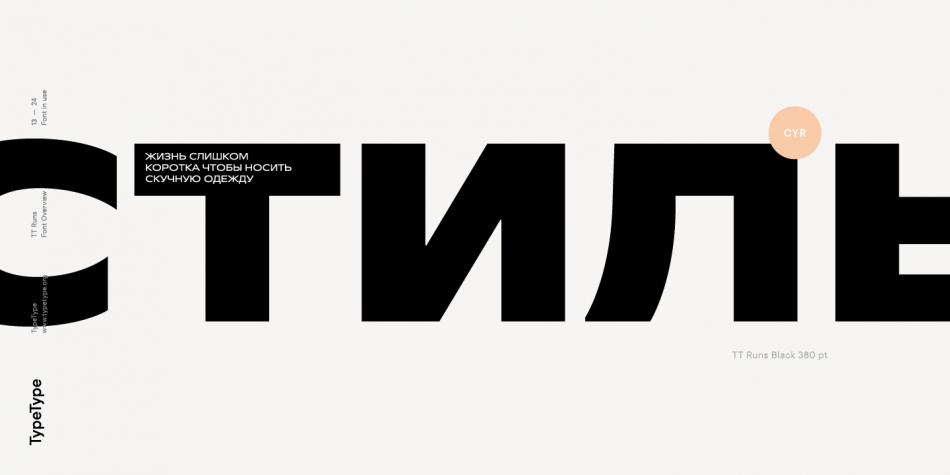 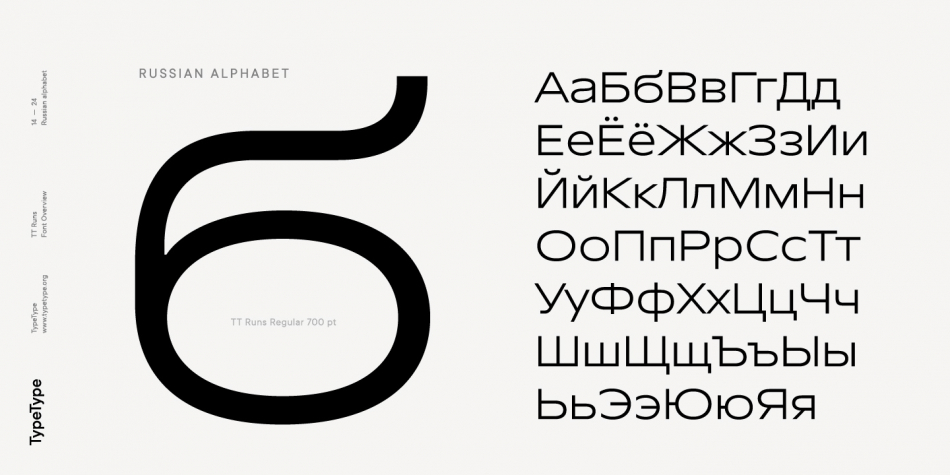 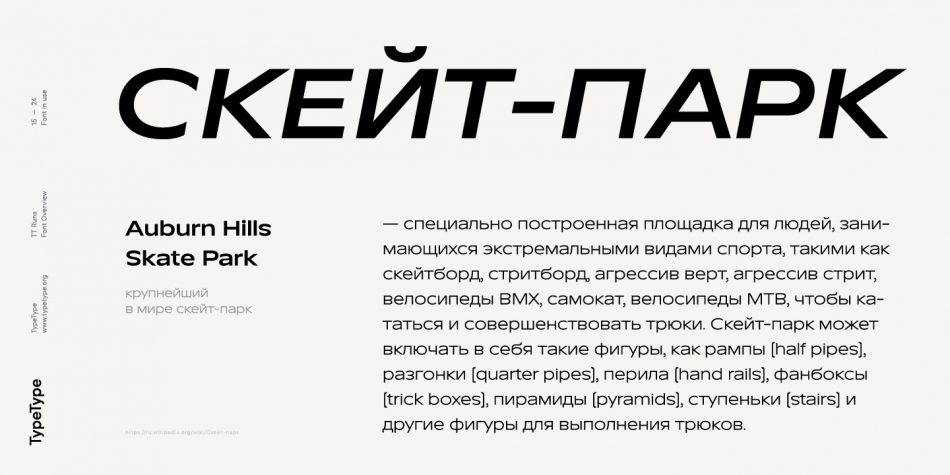 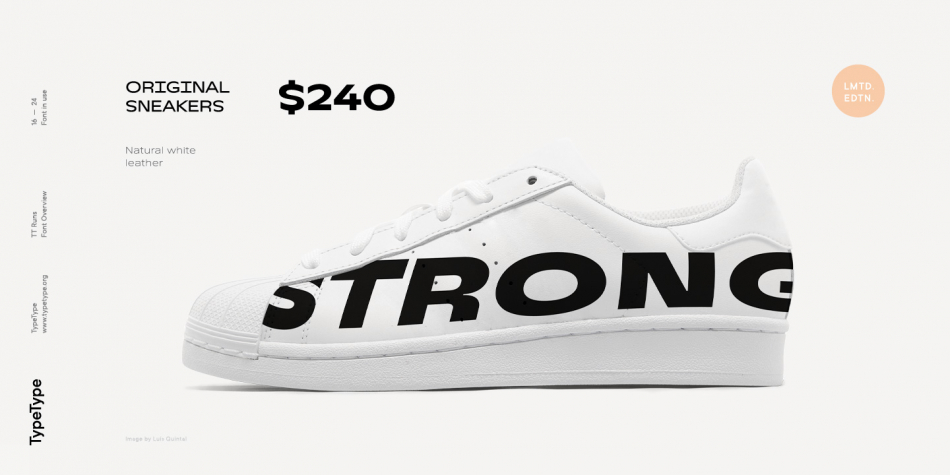 Designed by Vika Usmanova, Phillip Nurullin and Antonina Zhulkova, TT Runs is a sans serif font family. This typeface has twenty-two styles and was published by Typetype. 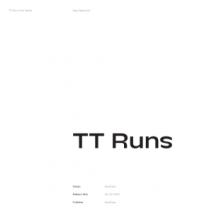 The TT Runs project started with a fairly simple idea—to create a wide modern sans-serif, which will reflect the sporty style and look good on sportswear. Before proceeding to sketching, we examined the theme of Olympic venues and their identities, and also traced the evolution of “sports” typefaces through different eras and continents.

In the end, we came up with the idea of making a typeface that is targeted for application to elastic sports outfits or casual sportswear. This decision has greatly influenced the appearance of the wide and slightly stretched proportions in our typeface, the appearance of the reversed contrast of the shape of some characters relative to the vertical line and their deformation, and the overall of the letters.

TT Runs is very versatile: on the one hand, it is a regular sans-serif that can be used even in a large text array, and on the other hand, it is a bright display typeface with irregular proportions of characters that looks great even in large headings.

A striking feature of the typeface is the difference between the top and bottom, the so-called inverse contrast of the shape relative to the vertical line, which is especially noticeable in uppercase characters (for example, in the letters K, C, S, R). In lowercase characters, everything is calmer and more traditional, the reverse contrast of the forms relative to the vertical line is greatly softened and almost invisible.

TT Runs consist of 22 styles: 9 upright & 9 obliques, plus 2 variable fonts, and 2 outlines styles which includes 739 glyphs (exld. outline). In addition to the broad language coverage in the typeface, you can find a bunch of useful OpenType features. Stylistic alternates, standard and discretionary ligatures, old-style figures, numbers in circles, arrows and much more.