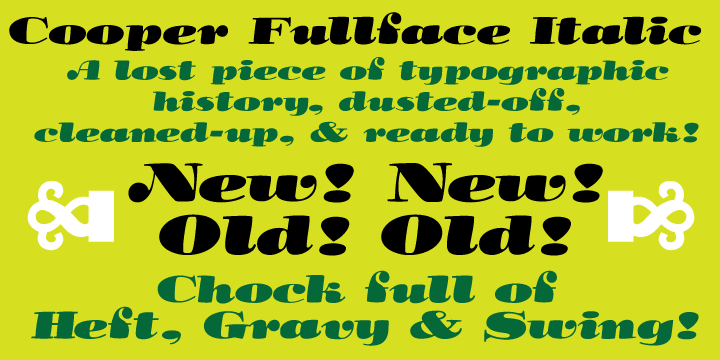 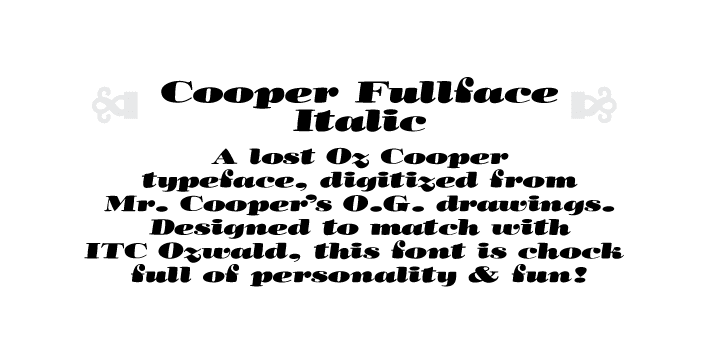 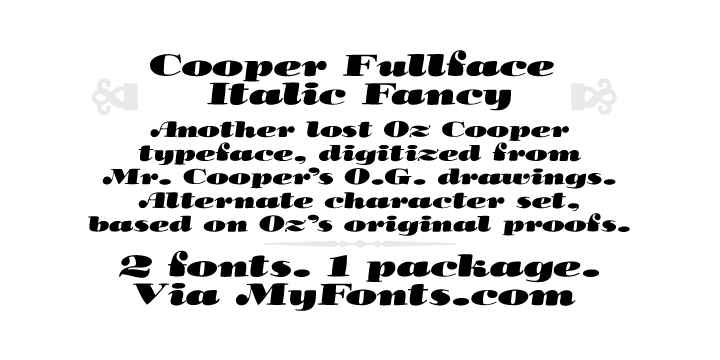 Cooper Fullface is a display font family. This typeface has two styles and was published by Wordshape.

At the end of 1927, Oswald Bruce Cooper yearned to create a heavy “modern” face- akin to Broadway and other display types in height and proportion, but more nuanced while being a dense, black type. The Barnhart Brothers & Spindler foundry, for whom Cooper had designed a number of typefaces, saw the potential of the typeface as a big seller. Richard McArther, General Manager of the foundry, referred to it as “the hotsy stuff”, though he was highly critical of a number of characters in the original design. He requested a successive number of modifications, including the addition of Dwiggins-inspired serifs to the face to make it stand apart from similarly-weighted typefaces then on the market. He wanted to imbue the face with a considerable amount of “old-timey” flavor in order to impart a sense of originality to the face and have it sell across both Modern and Bodoni/Didot market segments.

The resulting typeface was called Cooper Fullface, a jaunty and swollen caricature of a Didone with great potential for display advertising work. The final form of the face was a regulated and consistent balance of cartoonishness and earnest visual braggadocio, the bouncy, circus fairway-like swing of the original drawings of the letters taken down considerably and figures redrawn and redrawn for maximum readability.

A specimen sheet was mailed out in 1929, and generated moderate sales, but too late- Barnhart Brothers & Spindler closed its foundry division shortly thereafter as part of ATF’s corporate roll-up of manufacturing. The American Type Founders continued to produce the face and sell it at a decent pace, renaming it Cooper Modern.

Cooper designed a matching italic for Cooper Fullface, but it was never released. The BB&S foundry closure resulted in the foundry equipment being shipped to New Jersey a few weeks shy of the typeface’s completion. It is unfortunate, as the accompanying italic is perhaps Cooper’s masterpiece, a lively Bodoni-esque italic with more than a bit of influence from 19th Century display types, particularly in the treatment of the ball serifs on the uppercase “A”, “J”, “M”, and “N”. Cooper Fullface Italic stands as the until-now missing bookend to Cooper’s career as a type designer.

These two typefaces are the result of researching Cooper’s original drawings and series of engraved proofs for both typefaces. The typefaces include the original ligatures, original Oz Cooper ornaments, fancy swash characters, and a range of punctuation and diacritics, et al, that fill out a full character set. The typefaces have been lovingly kerned for the smoothest result in text setting.