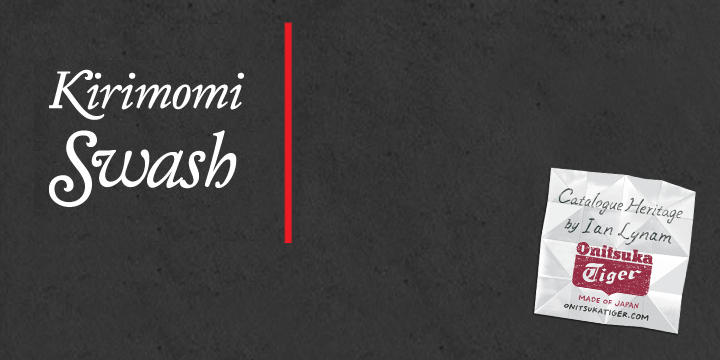 For the past year I’ve been working on a new type design project with the Japanese sports fashion brand Onitsuka Tiger in conjunction with my online journal, Néojaponisme. I sat down with some folks at Onitsuka Tiger’s office in Tokyo to pore over the company’s vast archives of print advertising from the company’s advent in 1949 through today, and to draw inspiration as I pleased for the design of a pair of digital fonts that help tell the story of Onitsuka Tiger as a brand.
Looking through the hundreds of ads, catalogs, brochures and assorted other materials, it became immediately clear that there was a bigger story to be told — the Onitsuka Tiger materials span the technological and cultural development of Modern printing. The typography and graphic design of Onitsuka Tiger’s assorted printed materials provided a myriad of potential jumping-off points that span both Japanese and Western history, revealing a startling series of commonalities as well as interesting divergent moments in time.

From classical influence to highly futuristic, there is a huge gamut of interesting sources to pull from. Onitsuka Tiger’s printed promotions started in the age of metal typesetting, took advantage of phototype compositing in the 1960s through the 1980s, then entered the digital realm in the the late 1980s. As a Japanese company that marketed domestically and abroad, the marketing department had to be aware of typographic trends internationally, and this was reflected in their printed materials. From the prevalence of American Type Founders typefaces used in early advertising mixed with hand lettering to incised prototype katakana and hiragana to the Helveticization of the globe, Onitsuka Tiger’s printed matter functions as a cultural and aesthetic survey of popular styles and unique approaches to graphic design.

• Kirimomi Swash
A display typeface which is rooted in both classical form and the sharp edges of photoype lettering. The typeface looks back to the historic forms of French typefounder Jean Jannon for it’s base, as well as the curved terminals and weighty serifs of the work of William Caslon. The various interpretations of their work throughout history have been applied to give each letterform presence, stability and rigidity. Sharp phototype swashes culled from the logo for Emperor, a line of golf shoes released by Onitsuka Tiger thirty-plus years ago have been applied to give the face a timeliness of the Modern/Postmodern era, offsetting the historical skeletal frame.

Kirimomi Swash is first and foremost a display face, and in order for it to function gracefully, a number of ligatures and alternate characters have been included. It is intentionally not designed for text setting, as that would require a smoothing-out of the most prominent elements, and the result would most likely be a typeface that while potentially being useful, would not stand out in a crowd.

A number of pattern-making glyphs have been drawn and included in lieu of traditional typographic ornament within each of these fonts. Contemporary font technology allows the deployment of pattern elements in a regulated environment, allowing designers to control the amount of space in side bearings. When typeset and leading/line-height is adjusted, one can create smooth, even patterns, choose coloring and adjust scale quickly without having to resort to external files.