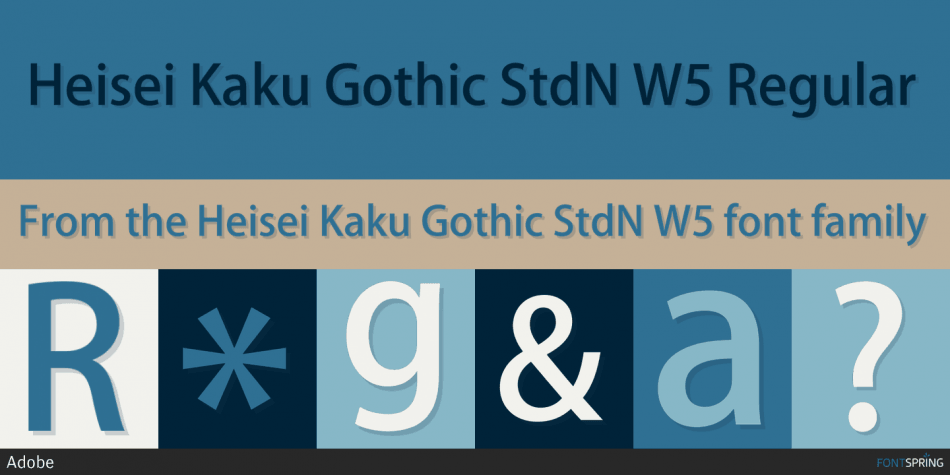 Heisei Kaku Gothic was one of the first typeface families developed by a group of type foundries formed by the Japanese Standards Association (JSA). In 1988, a font development project was started by the Font Development and Promotion Center (FDPC), which was formed as an affiliate of the JSA. A typeface design competition was held for gothic typefaces, and a design proposed by Nippon Typewriter Co., Ltd. (which later became Canon N.T.C., Inc.) was chosen. Heisei Kaku Gothic is a modern gothic, or sans serif, design whose kanji glyphs have simple stroke shapes. Still, its glyphs for hiragana and katakana characters have subtly curved strokes, offering a good balance between simplified and traditional letterform construction. The standard weight W5 is designed for use with Heisei Mincho W3. Four weights, W3 through W9 in odd-numbered increments, are available. All weights of the “Std” versions support the JIS X 0208 standard. Only W5 covers all of Adobe-Japan1-3, and the remaining three weights, W3, W7, and W9, cover an Adobe-Japan1-1 subset of Adobe-Japan1-3. One weight, W5, is also available as a “StdN” version that includes over 4,500 additional glyphs, supports the JIS X 0213 standard in its entirety, and is JIS2004-savvy.