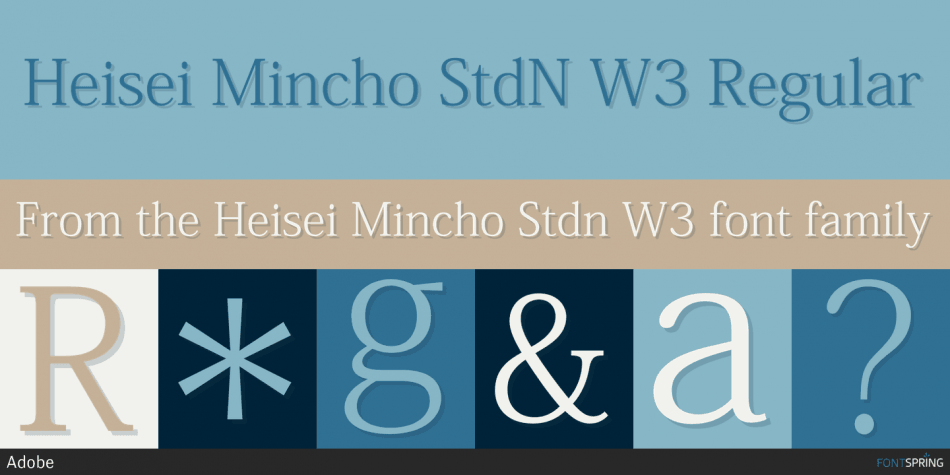 Heisei Mincho was one of the first typeface families developed by a group of type foundries formed by the Japanese Standards Association (JSA). In 1988, a font development project was started by the Font Development and Promotion Center (FDPC), which was formed as an affiliate of the JSA. A type design competition was held for mincho typefaces, and a design proposed by Ryobi Imagix Co. was chosen. Heisei Mincho is a modern mincho, or serif, design with relatively larger counter-spaces and simplified strokes composed of many straight lines. For better reproduction on low-resolution output devices, its horizontal stroke width is set heavier than other standard mincho typefaces. Lighter weights of Heisei Mincho, such as W3, are suitable for printing books and office documents. Four weights, W3 through W9 in odd-numbered increments, are available. All weights of the “Std” versions support the JIS X 0208 standard. Only W3 covers all of Adobe-Japan1-3, and the remaining three weights, W5 through W9, cover an Adobe-Japan1-1 subset of Adobe-Japan1-3. One weight, W3, is also available as a “StdN” version that includes over 8,000 additional glyphs, supports the JIS X 0212 and JIS X 0213 standards in their entirety, and is JIS2004-savvy.