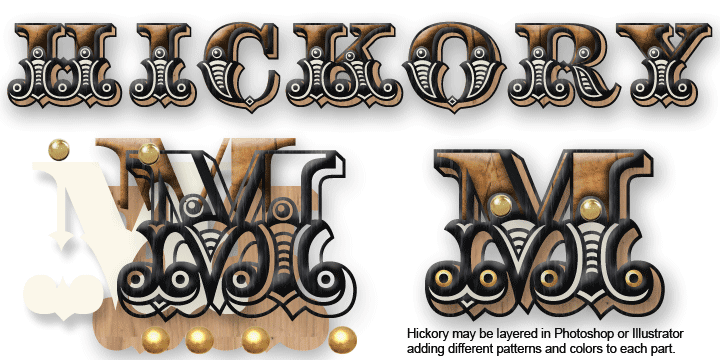 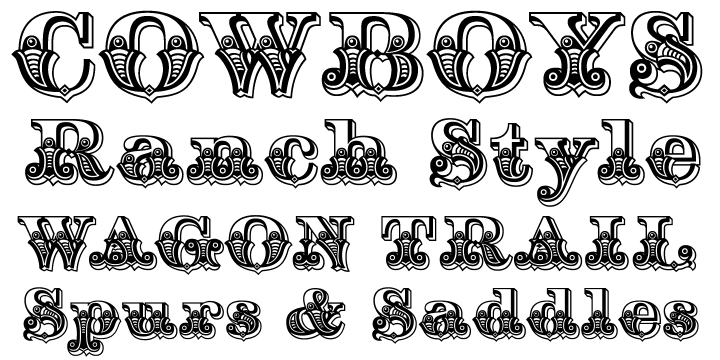 Hickory is a western font family. This typeface has four styles and was published by FontMesa.

Hickory is the revival of an old unnamed font dating back to 1852 and was sold through a few different type foundries including Bruce, MacKellar Smiths & Jordan and James Conner’s Sons.

By the year 1900 this font disappeared from the major type foundries, now with the digital age of type we’re proud to revive this old classic font that hasn’t been used in over one hundred years.
The original font was only available as an uppercase with punctuation and an ampersand. Today the character set has been updated to include a new lowercase, numbers and accented characters for Eastern, Central and Western European countries.

Three fill fonts have been created for the Hickory font making it easier for you to add different colors, textures and patterns to the letters.
You will need an application that works in layers such as Adobe Photoshop or Illustrator in order to use the fill fonts, some fill fonts may look good as a stand alone font, the Hickory fill fonts however do not look good used apart from the Hickory main font.

I hope you enjoy this old font as much as I did making it.