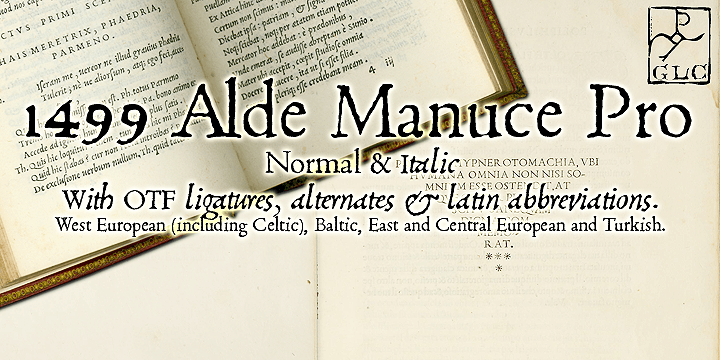 1499 Alde Manuce Pro is a historical font family. This typeface has two styles and was published by GLC Foundry.

This family was created inspired from the beautiful roman font used by Aldus Manutius in Venice (1499) to print for the first time “Hypnerotomachia Poliphili…”, the well known book attributed to Francesco Colonna. Francesco Griffo was the punchcutter. The present font is containing all of the specific latin abbreviations and other ligatures used in the original. The Italic style, carved by Francesco Colonna, the so called “Aldine” style, was inspired from various documents, all printed with this first Italic font. We offer the complete set of ligatures (about 60) we have been able to find, contained in the original font. In the two styles, we have made differences between I and J, V and U, to make easier a modern use. Added are the accented characters and a few others not in use in this early period of printing.

The Italic style may be used as a complement to our “1470 Jenson Latin”.  The font is containing all characters for West European (including Celtic), Baltic, East and Central European and Turkish language.