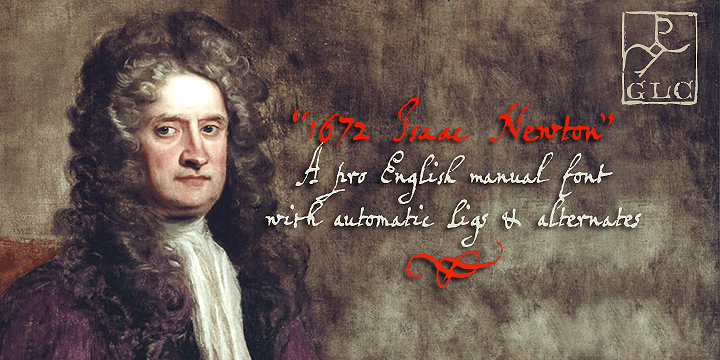 1672 Isaac Newton is a historical and script font published by GLC Foundry.

Isaac Newton, father of the Gravitation theory, has used several forms of handwriting in his life, in numerous texts about numerous scientific subjects. Here, we are proposing a hand, using particulary legible script form, coming from texts written in the year 1672, the year he presented a new reflecting telescope to the Royal Society.
It is a “Pro” font containing Western, Eastern, Central and Northern European, Icelandic, Baltic, and Turquish diacritics.  The alternates and ligatures allow to made the font looking as closely as possible to the real hand. Using an OTF software, the features allow to vary automaticaly characters of a word without anything to do but to select contextual alternates and standard ligatures.