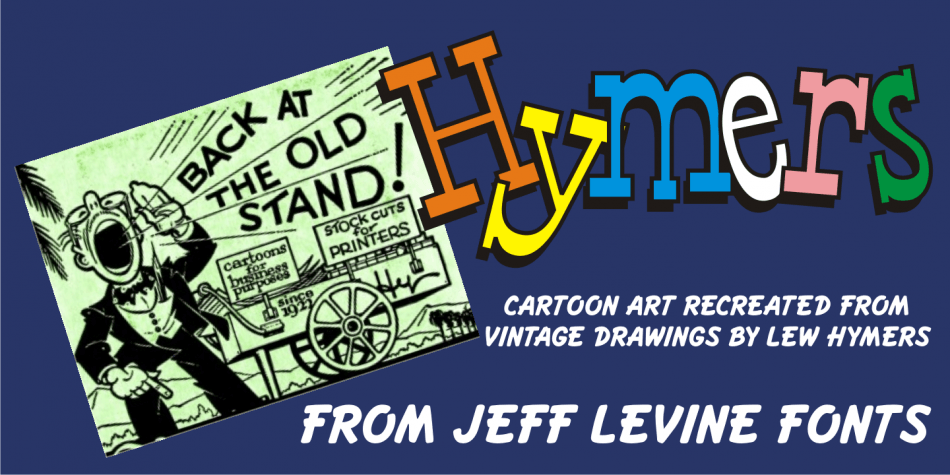 Born on May 8, 1892 in Reno Nevada, Lewis Franklin (‘Lew’ ) Hymers left an indelible mark as a caricaturist, cartoonist and graphic artist.

At the age of twenty in [1912] he worked for the San Francisco Chronicle.  During World War I he worked for the Washington Post.  He even was employed for a time by Walt Disney as an animatorÖ but most of his life was spent in either Tujunga, California or his birthplace of Reno, Nevada as a self-employed illustrator.

Hymers inked a feature for the Nevada State Journal called “Seen About Town”, which was published during the 1930s and 1940s.  In this panel, he caricaturized many of the familiar faces around Reno.

He also designed signs, logos, post cards and numerous other commercial illustrations for clients, but what has endeared him to a number of fans was his vast library of stock cuts (the predecessor to paper and electronic clip art) which feature his humorous characters in various professions and life situations.

So popular is his work amongst those ‘in the know’ that a clip art book collection of over
seven hundred of his drawings that was issued by Dover Publications [but long out of print] commands asking prices ranging from just under $15 to well over $100 for a single copy.

Lew Hymers passed away on February 5, 1953 just a few months shy of his 61st birthday.  Although his artwork depicts the 1930s and 1940s lifestyles, equipment and conveniences, more than sixty years after his death they stand up amazingly well as cheerful pieces of nostalgia.

The twenty-seven images (and some variants) in Hymer JNL were painstaking re-drawn from scans of one of his catalogs and is but just a tiny fraction of the hundreds upon hundreds of illustrations from the pen of this prolific artist.