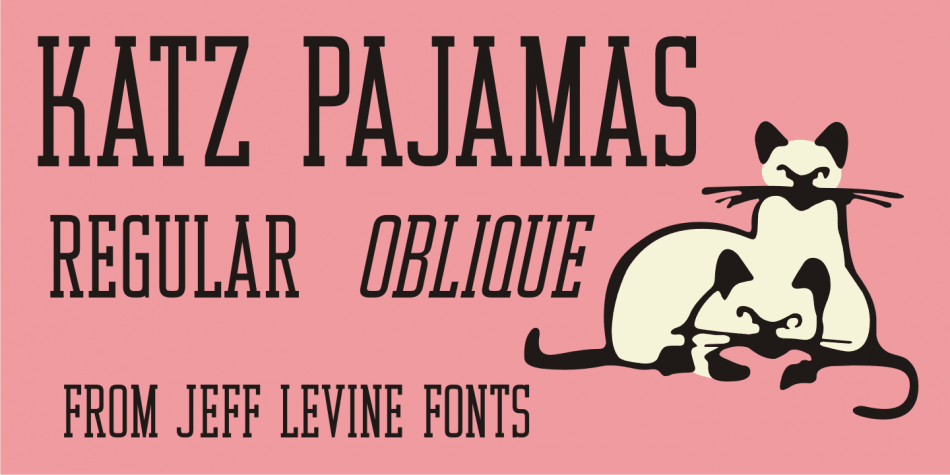 Katz Pajamas JNL is a display slab font family. This typeface has two styles and was published by Jeff Levine Fonts.

According to Wiktionary, “the cat’s pajamas” was a slang phrase coined by Thomas A. Dorgan, the well-known journalist, cartoonist and sportswriter of that era.

The phrase became popular in the U.S. in the 1920s, as the word “cat” was used as a term to describe the unconventional flappers from the jazz era.

This was combined with the word pyjamas (a relatively new women’s fashion during that time) to form a phrase used to describe something that is the best at what it does, thus making it highly sought and desirable.

Wikipedia adds that Dorgan was the first to use the terms “twenty-three, skidoo”, and “yes, we have no bananas”, “apple sauce” and “solid ivory”, which also became part of the slang of the “Roaring Twenties”.

Katz Pajamas JNL is a condensed slab serif typeface based on the title lettering for the 1944 sheet music “Pretty Kitty Blue Eyes”, hence the pun-laden font name paying homage to this bit of verbal Americana as well as making the pajamas a pair owned by Mr. Katz instead of the fashionable feline.

Available in both regular and oblique versions.