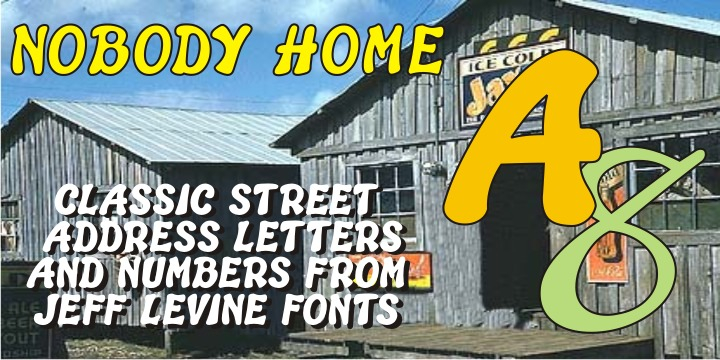 Nobody Home JNL is a comic font published by Jeff Levine Fonts.

Nobody Home JNL is unusual in nature as it combines two vintage typestyles into one font. Both have been used for home and property identification for decades and still remain popular. Over the years the letters and numbers have been made of cast steel, aluminum, brass and plastic.

The alphabet is in a distinctly bold, asymmetrical style, while the numbers almost take on a calligraphic feel.
There is just a basic character set - alphabet, numerals and simple punctuation. While the font has been reasonably spaced and kerned, it’s best to remember that neither type design was made with digital technology in mind, so it’s suggested to adjust your layout manually for optimum results.

Nobody Home JNL is best-suited for replicating street addresses, apartment numbers on doors, and homeowner (or apartment house) names on buildings - whether in print design or as plotter-cut vinyl graphics.