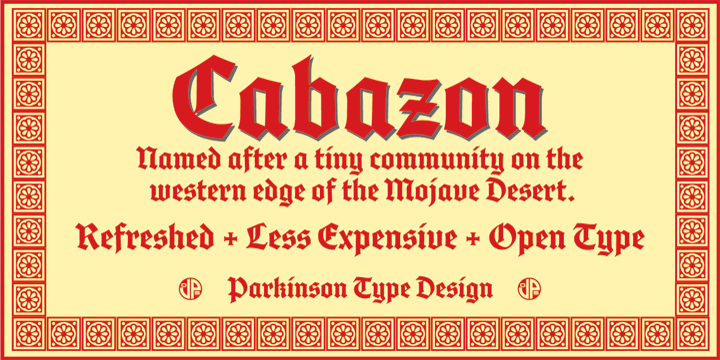 Cabazon is a blackletter font published by Parkinson Type Design.

The tiny community of Cabazon is located in southern California on the western edge of the Mojave Desert. There are two giant cement dinosaurs in Cabazon. Perhaps you’ve seen them. They had a cameo in the movie “PeeWee’s Big Adventure.”

Cabazon, the typeface, is an informal blackletter inspired by handlettering samples from many sources, and various time periods. Works by Rudolf Koch and Friedrich Heinrichsen are reflected, as well as the work of showcard lettering artists Ross Gerorge and Samuel Welo. Medieval manuscript samples were also helpful in developing this style.

It was designed in 2005 by Jim Parkinson. Originally released as a Type 1 font, Cabazon was refreshed (version2) and re-released as simple Open Type in 2012.