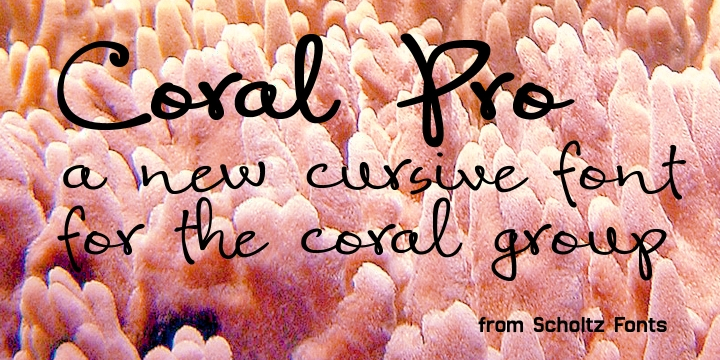 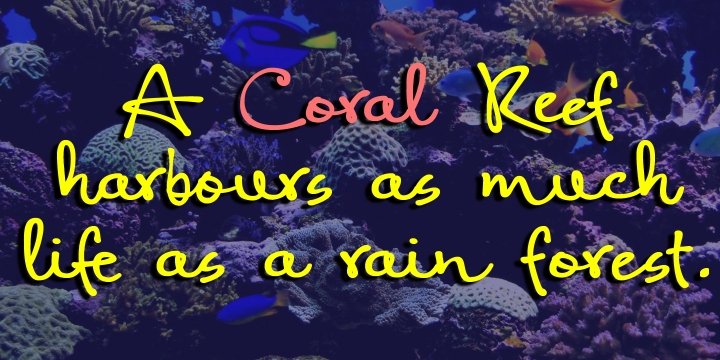 Coral is a hand drawn font family. This typeface has two styles and was published by Scholtz Fonts.

Coral had its origins in the font Leah. I had requests from users that I create a cursive version of Leah. (In a cursive font the letters are joined together as in handwriting). In the process of development it changed sufficiently that I decided to release it under its own name. Hence “Coral”.

Coral is relaxed but very readable. It is, perhaps, a tad more formal and regular than Leah but not sufficiently so as to detract from its relaxed quality.
The font is fully professional: carefully letterspaced and kerned. It contains over 235 characters - (upper and lower case characters, punctuation, numerals, symbols and accented characters are present). (It has all the accented characters used in the major European languages).

Coral Pro Black is a bolder script than the original Coral, and has an in-your-face, clear and casual look. It’s great used for anything from “schoolgirl diaries” to fashion media. It has been updated, and now has all the features usually included in a fully professional font. Language support includes all European character sets.