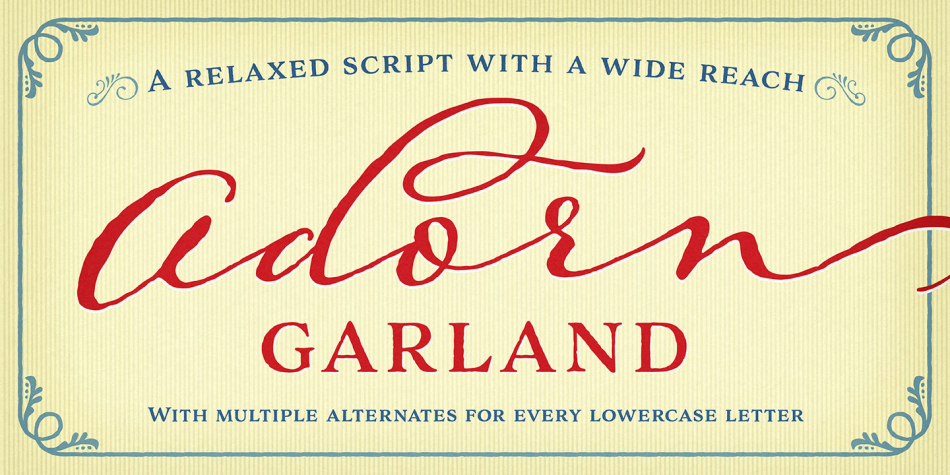 Adorn Garland is a script and modern calligraphy font published by Laura Worthington. 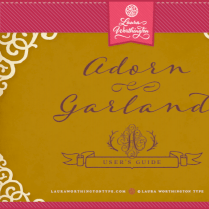 While each font in the carefully orchestrated Adorn collection can stand alone, the particular combination of contrasting scripts, display fonts, romans, and the multitude of stylized fonts in Adorn’s extraordinary toolkit makes each designer’s creation one of a kind. Buy the entire collection, 20 fonts for $99.

Adorn Garland is a script face that runs along a different, and somewhat “vintage” direction. Beautiful as it is, it works as more of a textural element than a headliner, a supporting actor rather than the leading role—though designers can make much of it on its own if they choose. It’s not the bold statement; it’s the subheading, the afterword, the reminder: “Wedding reception to follow.” With its slow, and gently deliberate style, and long entry and exit swashes, it can function as a long string, rule, or dividing line. Rather than deriving its strength from a heavy skeleton or structure, it uses its sense of contrast, its light touch upon the page, and its elongation to provide a visual break. With 234 swashes and alternate letterforms.